'The home became a crime scene': Airbnb host's home shot at after party shut down

TORONTO -- A woman from Maple, Ont. said her home was shot at after she shut down an unauthorized party thrown by one of her Airbnb guests.

On Sept. 22 three women said they needed a place to stay for an evening and Busi Mlotshwa agreed to let them stay in the top part of her home while she was in the basement.

After the women arrived, more people showed up until there were about 20 people allegedly being loud, drinking and doing drugs.

“They said they were not there to party, but left behind a birthday cake and they left up balloons," Mlotshwa said.

She asked everyone to leave and said she would refund their money. While some people did leave, they returned a short time later and shots were fired. Police said about 20 bullets hit Mlotshwa’s car, garage door, windows and a patio door. One bullet ended up lodged in her kitchen cupboards. 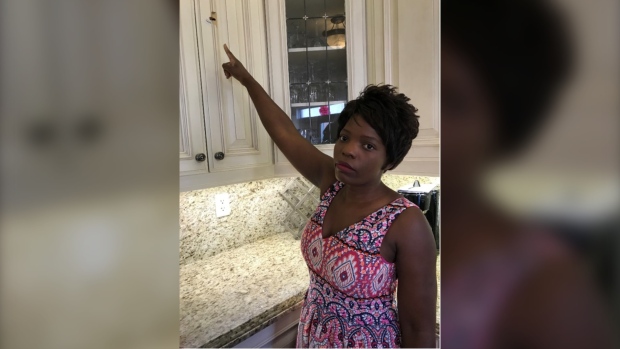 Airbnb host Busi Mlotshwa points to a bullet hole in her kitchen cupboards. She says her home was shot at after she shut down a party thrown by one of her guests. (CTV News Toronto)

“Before I could do anything the police were here and they came in the house with their guns pointed,” Mlotshwa said.

They told her she had to leave so she stayed in a hotel.

“The police kicked us out, the home became a crime scene and the house was sealed and they took my car," she said.

Mlotshwa said she also had to change her locks.

Now she wants Airbnb to pay to repair all damages and reimburse any expenses related to the incident.

“I want them to fix my house" Mlotshwa said.

When CTV News Toronto contacted Airbnb, a spokesperson told us “The reported behaviour is appalling and we have removed the booking guest from our community.”

“Airbnb provides hosts with protection against property damage through our $1 million host guarantee and we have reached out to Ms. Mlotshwa to help initiate a claim,” the Airbnb spokesperson added.

Mlotshwa said it’s been a frustrating experience and that she's not sure if she'll ever rent out her home again.

“It's dangerous, it can be dangerous. Anything could happen -- you could die," Mlotshwa said.

Airbnb said safety is a top priority. The company said that 2 million people check into Airbnb properties around the world each night and that negative incidents are extremely rare.