The Force will be strong in this year’s Pride Parade 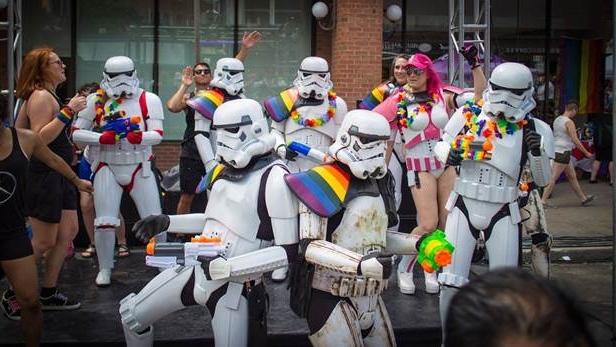 Stormtroopers celebrate at a pride event in 2017. (@plaidvader/Instagram)

The 2019 Toronto Pride Parade will have added flair this year from a galaxy far, far away.

On June 23, Fan Expo Canada will join forces with costuming groups from around the galaxy to celebrate diversity, freedom and heroes in the downtown core.

Stormtroopers, Jedi, and Ghostbusters will be among the “series of cosplayers that represent film and television pop culture” for the first-ever appearance by Fan Expo Canada in the Pride Parade.

“We wanted to show the community that we are celebrating inclusion and diversity… it is a tenant of Fan Expo Canada,” said Gilbert Estephan, Sr. Show Manager with the comics, sci-fi, horror, anime, and gaming event.

A “battalion of Stormtroopers” from the Canadian Garrison of the 501st Legion will be leading the group, bringing some love from the dark side to an estimated crowd of more than 1 million parade-goers.

“This is the first time the 501st has been invited to participate in Toronto Pride Parade.” said Ted Healey, a member of the legion.

“While we do have LGBT+ members and their allies who have dressed up in their own special way for Pride, this is our first official march and we are very excited to participate.” he said.

Both the 501st and the Rebel Legion have inclusivity written into their charters, ensuring the culture of Star Wars can be enjoyed by all. “Marching in Pride shows that LGBT+ people have greater interests other than what might be typically perceived.” Healey said.

Even though the costumes can be sweltering in June, Healey pointed out, “there will be water guns.” When asked about the accuracy of those Stormtroopers he added: “We’ve been practising.”

Pride Toronto describes the parade on their website as: “...not only about Pride in Toronto’s LGBTTIQQ2SA community, but celebrating diversity and the variety of life in Toronto while respecting differences amongst its citizens and visitors, and creating an inclusive experience for all.”

Estephan says that Fan Expo Canada’s theme this year is discover, celebrate and belong, which is what Pride is all about.

The Toronto Pride Parade kicks off at noon June 23, 2019, from the corner of Church Street and Bloor Street all the way down Yonge Street to Yonge-Dundas Square.