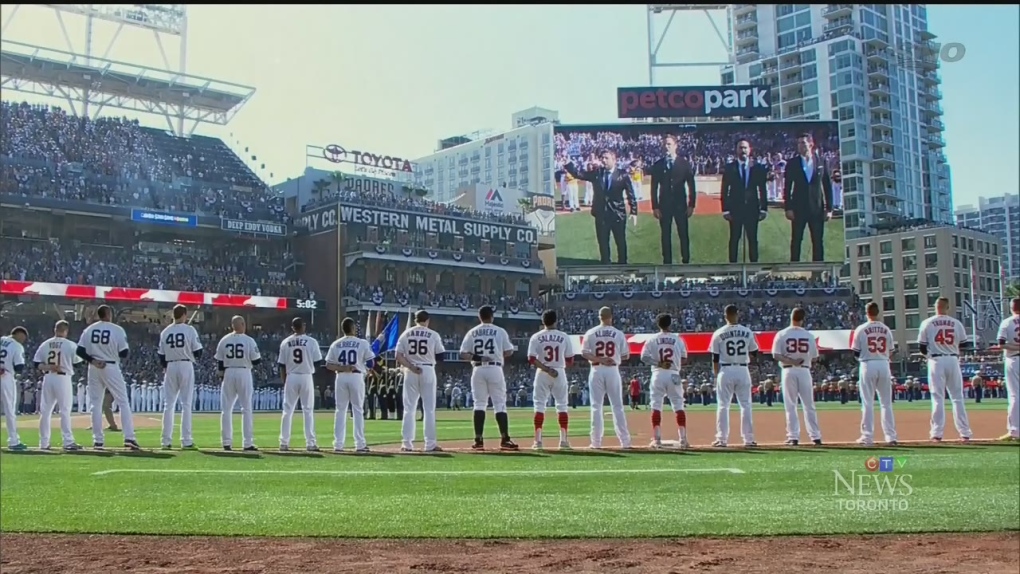 TORONTO -- The Tenors member who altered the lyrics to O Canada prior to the Major League Baseball all-star game is backing out of at least two upcoming concerts in Ontario.

Remigio Pereira recently apologized after making headlines for changing the verse "With glowing hearts we see thee rise, the True North strong and free," to "We're all brothers and sisters, all lives matter to the great."

He also held up a sign bearing the message "all lives matter" on one side and "united we stand" on the other, while standing alongside his fellow Tenors on the field.

In the aftermath of the incident, the Aeolian in London, Ont., cancelled a concert featuring Pereira and Toronto artist Pavlo slated for Sept. 28.

Aeolian production and marketing co-ordinator Michael Del Vecchio says the concert has been reinstated now that Pereira is no longer involved with the tour.

Pereira was also to perform with Pavlo at the FirstOntario Performing Arts Centre in St. Catharines, Ont., on Oct. 6. But the venue issued a statement saying that the tour would continue as "Pavlo & Guests" and would no longer feature Pereira, citing Pavlo's representatives.

In a post on his verified Facebook page, Pavlo says his upcoming performances will continue on without Pereira "due to circumstances beyond my control" and expressed compassion for his friend and touring partner.

"The man has sincerely apologized. Let's move on!" the post reads.

"Those of us that know him personally can assure you that he did not have any malicious intent. The last thing he wanted to do was disrupt the thousands of people that made arrangements to attend the concerts. Looking forward to seeing everyone at the shows."

Social media lit up with widespread condemnation of Pereira's unanticipated move at the all-star game, while the other three Tenor members distanced themselves from him, saying in a statement that he acted as a "lone wolf."