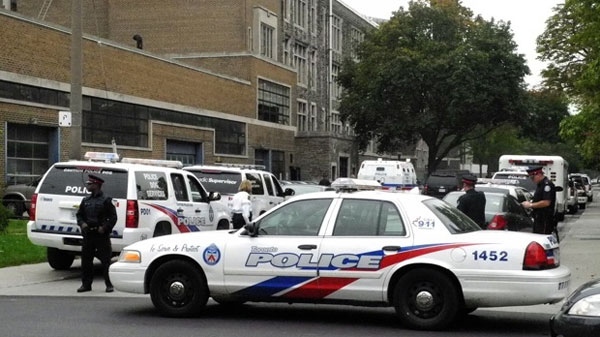 Police are seen at Central Tech high school, near Harbord and Bathurst Streets, after reports of a shooting in the school on Thursday, Sept. 30, 2010. (John Hanley / CTV News)

Two teens have been charged in relation to a shooting inside a downtown Toronto high school while police continue to search for another suspect.

Toronto Police Det. Chris Chilvers confirmed the arrest of two 17-year-olds Friday evening, in connection with a confrontation at Central Tech high school in which a shot was fired.

He said they continue to search for the shooter and the gun, but have a number of promising leads.

"We believe that we have an idea who the shooter is and are actively investigating several different avenues," Chilvers told CTV.ca on Saturday.

On Thursday, three teens were in a stairwell when one of them became involved in a confrontation with a fourth teen and someone fired the gun.

The intended target was another 17-year-old. He was not seriously injured, but suffered a burn wound to his forehead.

The school, near Harbord and Bathurst Streets, was put into lockdown for three hours as police scoured the building and surrounding area.

Three other young men were questioned following the incident, one of whom was believed to be the victim.

The other two were charged with offences not related to the shooting.

The suspect still at large is described as a 17- or 18-year-old black male, 6'0" with a medium to skinny build.

Investigators believe there were witnesses to this shooting and are encouraging them to either contact Detective Chris Chilvers at 416-808-1463 or Crime Stoppers anonymously at 416-222-TIPS (8477).