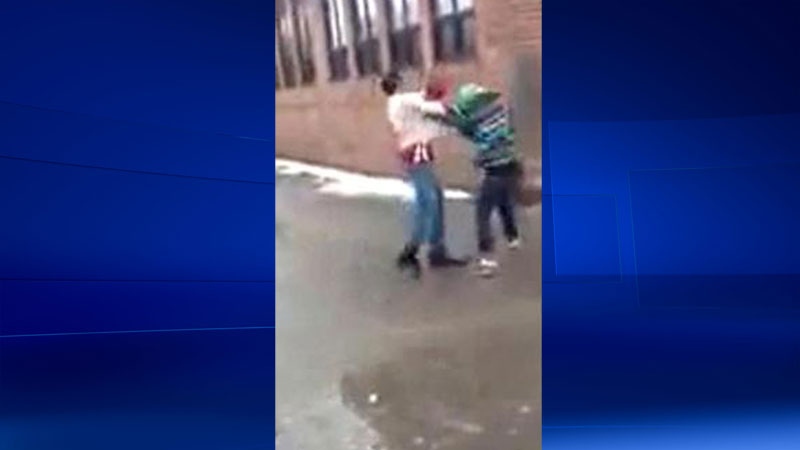 A screen capture from a video recorded of a schoolyard fight in Georgina, Ont. is seen in this image taken from YouTube.

Four students have been charged after video of a schoolyard fight in Georgina, Ont. was posted on YouTube last month.

The students aged 14, 15, 16 and 18 have been charged with assault after a 17-year-old black student was beaten outside of Sutton District High School in Georgina, roughly 80 kilometres north of Toronto, on April 8.

In the video, one male can be seen hitting the black teen while onlookers, some yelling racial slurs, film the attack on their phones.

At the time of the incident, four students were suspended. They have since returned to school.

York Regional Police Const. Andy Pattenden told Toronto.CTVNews.ca that he won't comment on the specifics of the ongoing investigation, but said that hate crime investigators are involved.

Pattenden said that police are working with the York Region District School Board to come up with an education program focusing on hate crimes and human rights.

The beating was not the first time a racially-charged incident at the Sutton District High School has made headlines. In February 2013, the school was forced to ban images of the Confederate flag after students showed up wearing clothing bearing the symbol.

The Confederate flag, with its ties to slavery in the U.S., has long been associated with prejudice and racism. Some students were wearing the symbol on belt buckles, backpacks and bandanas.

Since the flag was banned, York Region District School Board spokesperson Lincinio Miguelo told CP24 that there have been several programs implemented to make the school's environment more inclusive.

The school started a peer mentoring group and a social justice committee, in addition to a partnership with York police.

Miguelo said that the school will conduct its own investigation into the alleged assault and present its findings to the school board which can determine what disciplinary action should be taken.