TORONTO -- Toronto homicide detectives are investigating after a young male was fatally shot in broad daylight near a gas station in Scarborough Monday afternoon.

Officers were dispatched to the Markham and Ellesmere roads area at around 3:10 p.m. after receiving multiple calls about the sound of gunshots in the area.

A victim, described by police as a boy, was then located with apparent injuries on scene at the southwest corner of the intersection.

He was rushed to hospital via emergency run with critical injuries.

A few hours later, police confirmed that he died of his injuries. Investigators are currently in the process of notifying his family and no identifying information has been released.

“Our officers arrived on scene within minutes and unfortunately located a young male victim with gunshot wounds,” Const. Alex Li told CP24. “We are appealing to anybody with information to contact us.”

One male was taken into custody in connection with the shooting within about 20 minutes after the incident, police said.

It is not clear whether any additional suspects are being sought.

Speaking with reporters, Insp. Susan Gomes called the shooting “brazen” and urged anyone with information to come forward.

“If you’ve noticed anything, witnesses to this incident, please come forward,” Gomes said.  She noted there were many pedestrians and vehicles in the area at the time and said police are particularly interested in speaking with anyone who may have dashcam video. 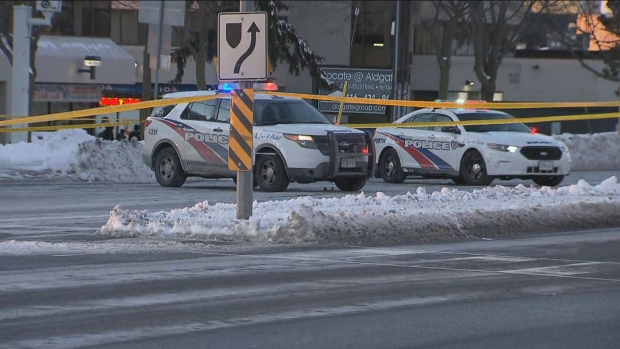 One woman from the area who didn’t want to be identified told CP24 that she heard two or three gunshots.

“We were leaving our home at that time and we heard gunshots and everybody was turning around and looking at the corner of Markham and Ellesmere,” she said. “We figured it was gunshots by the sound. We just didn’t know where exactly it was coming from.”

A TTC spokesperson confirmed that one of the bullets struck a TTC bus. TTC staff on scene gave a statement to police. The spokesperson could not immediately confirm whether anyone was on-board the bus at the time of the shooting.

Police have said nobody else was injured in the shooting.

Nearby Woburn Collegiate Institute was placed under lockdown in the immediate aftermath of the shooting, though it was lifted a short time later.

Officers combed the scene for evidence and spoke with witnesses following the shooting.

On Monday afternoon several police cruisers could be seen parked outside a nearby apartment building. Members of the canine unit were also observed in the area.

Police said the investigation is currently in its “infancy” with few details known about the circumstances surrounding the shooting.

The intersection of Markham and Ellesmere roads has been completely closed to accommodate the police investigation.

SHOOTING: (UPDATE)
Markham Rd & Ellesmere Rd
- shooting victim has succumbed to his injuries
- Toronto Police Homicide Squad has now taken carriage of the investigation @TPSHomicide
- D/Sgt. Andy Singh will be speaking to update the media at the scene#GO135493
^al