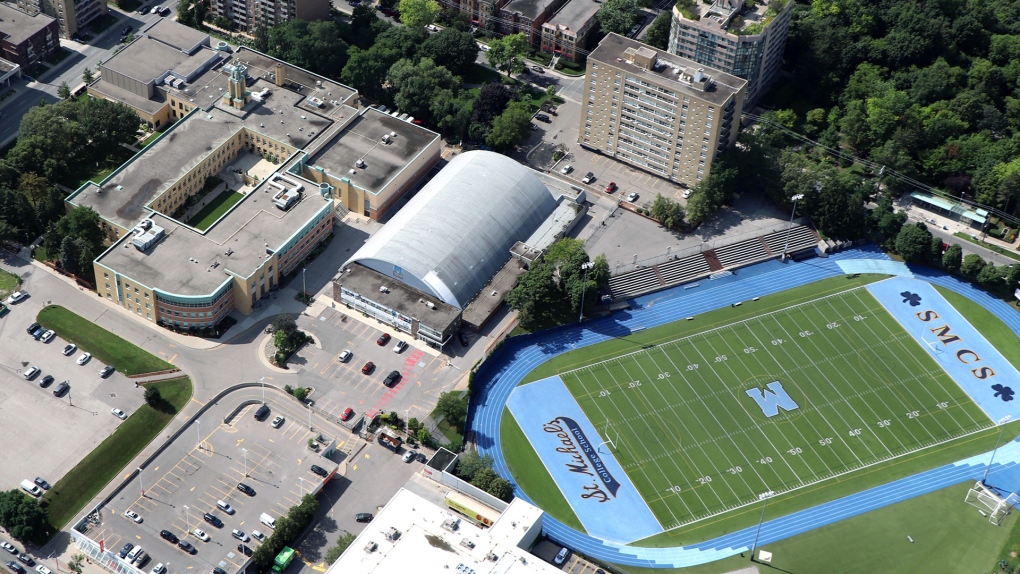 TORONTO -- A student at a prestigious all-boys private school suspected "something might have been going on" when he saw a boisterous crowd gather in the school's locker room after a championship football game, but didn't witness a sexual assault on another student, he told a Toronto court Wednesday.

Taking the stand by videoconference, the teen described feeling concerned as he saw a "large group of people, like a gang" form a circle in the locker room at St. Michael's College School in November 2018, though he couldn't tell who exactly was involved.

"I could hear bantering and yelling but I didn't know what it was about at the time," he said.

He didn't see the complainant in that incident until later that evening, in another part of the school, the teen said. The pair walked to the subway station together and discussed what happened, the teen testified.

Prosecutors told him not to relay the contents of that conversation but asked if he could describe the other boy's demeanour.

"He was in pain. He was very frustrated, very mad. One thing I will say is he said he wanted to transfer schools," the teen recalled Wednesday.

The other boy also pulled down his trousers slightly to show that his underwear was ripped along the waistline, he said.

The boy was testifying at the trial of another teen boy, who was then a student at the school.

The witness also admitted Wednesday he was one of the people who shared a video of another incident in which another teen boy was struck on the buttocks with a broom in the same locker room earlier that fall.

At the time, he did not consider the video - which he recalled receiving through Snapchat - to be child pornography, nor did he think sharing it amounted to cyberbullying, the witness said during cross-examination. He said he takes the matter much more seriously now.

Last week, court viewed two videos in which a teen boy, the one who appeared in the video shared on Snapchat, described several incidents to a police investigator.

In one of the recordings, that teen recalled being struck with the broom handle in the locker room in September 2018, then being sexually assaulted with it in the same room in October.

In the other, he recounted witnessing the November sexual assault on the other student.

He did not mention the accused teen in connection with the first incident, but alleged the accused held back the arms of the victim in the second.

The teen who testified last week was initially among those charged in the November 2018 incident, but the charges against him were dropped.

One of them also pleaded guilty to making child pornography for recording one of the sex assaults in a video that was then shared within the school and beyond.

Another student received a two-year probationary sentence with no jail time after pleading guilty. The charges against another student, aside from the one who testified, were dropped

None of the minors involved in the case - including the accused, the complainants and some witnesses - can be identified under provisions of the Youth Criminal Justice Act.

This report by The Canadian Press was first published Dec. 9, 2020.