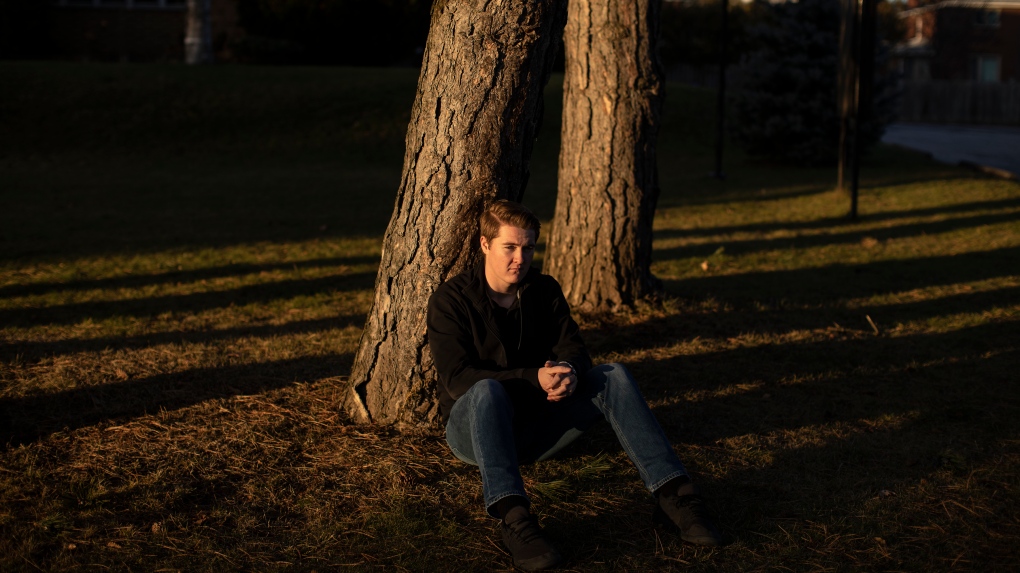 Sean McCann is photographed near his Toronto home on Thursday, November 28, 2019. The 19-year-old student was shot after going to a mansion party at an Airbnb in Etobicoke in April of this year, and has launched a lawsuit against the company, the owner of the house, the party organizer and the shooter. (THE CANADIAN PRESS/Chris Young)

TORONTO -- Just about anything can set Sean McCann's mind racing to the night a bullet ripped through his body. It can be a loud noise, an invite to a party or news of another shooting at an Airbnb rental.

The latest such incident at an Airbnb condo in Toronto left three young men dead and prompted the American company to launch a pilot program in Canada aimed at limiting young adults' ability to book properties.

The company had previously announced a ban on so-called "party houses" following a shooting in Orinda, Calif., that left five people dead. It also recently introduced a hotline and an online tool where neighbours can send concerns to the company about unruly properties.

There have been a number of similar incidents in Canada, including a shooting on April 27, 2019 in which McCann was wounded, another one at a prom party in Stouffville, Ont., a week later that killed an 18-year-old, and one at a house party in Newmarket, Ont., in October 2019 that left a man dead and sent a woman to hospital.

"I don't know why they had to wait for so many people to die or get injured before trying to stop it," said McCann. "But, honestly, it seems more like a PR stunt. If they really cared, they would have made changes after these shootings started."

McCann also expressed doubt about whether the new measures announced by the company will prevent shooting incidents from happening in the future.

"How are they going to enforce these new rules?" he said. "People will figure out a way around it. This won't change anything."

Last April, McCann and his friends wanted to go out after his final exam at Toronto's Humber College, where he was studying business management, and they had heard about a "mansion party" -- large houses rented on Airbnb for the sole purpose of having big bashes -- that had been making the rounds on social media.

He says it cost $15 per person to get in and two men acted as security and patted down arriving guests.

"We thought it was weird, but whatever," McCann said.

The large home was packed. Many smoked inside and one guy was playing with a knife. The group of friends did not know many there, he said.

The place was so busy, they could only make their way outside through the back door, where they saw a friend they knew.

"We're just talking to him, then the shooting started," he said.

They couldn't figure out where it was coming from, but the shots rang out in quick succession.

"I heard another shot, then felt something," he said.

He was near a set of stairs going down the sloping backyard toward the fence when he crumpled on the railing. His friend ran back to help and shone a light on McCann, whose clothes were covered in blood.

He got up and they pair jumped over the backyard fence and onto a nearby road where McCann collapsed.

A police officer responding to a noise complaint was there within minutes, McCann said.

The bullet entered McCann's body along his belt line, tearing skin and muscle before ricocheting off his pelvis, which fractured, and exiting through his right groin. He was taken to Sunnybrook hospital where he stayed for four days before he was discharged.

His recovery took a while, McCann said. Walking was difficult, as was lifting his leg to get into bed and going to the washroom. The pain gave him many sleepless nights.

Once the physical pain abated, the mental anguish began.

"Anything on TV can set me off. Sometimes I get upset and have to leave the room, it just takes me back to that night," he said.

His mind tricks his body, he explained. Anxiety kicks in, he sweats and sometimes has a panic attack. Fear grips his body.

Working with a therapist has helped to develop techniques, like mind tricks, he said.

"The best thing is instead of excusing myself from a situation is try to bring yourself back, so that it grounds you in the present, where I'm safe," he said.

McCann has filed a $5-million lawsuit against Airbnb, the home's owners and the party's hosts, alleging negligence.

Two people were arrested on the night of the shooting and charged with possession of guns.

A spokeswoman for Airbnb said the company took immediate action after the incident.

"The senseless violence reported has no place in the Airbnb community and we immediately removed the booking guest from our platform in April," Lindsey Scully said in an email.

The City of Toronto has since implemented online registrations, licensing and enforcement systems for short-term rentals.