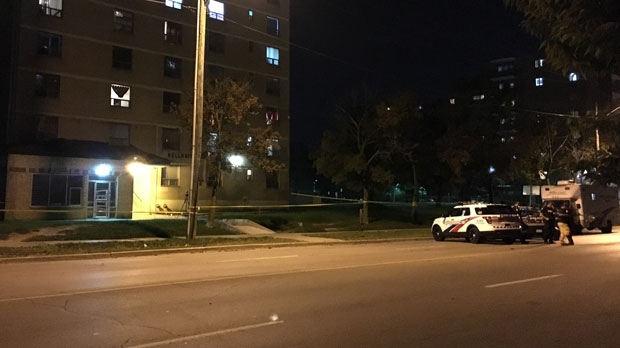 Police are investigating after a male victim was fatally shot in Scarborough, Ont. (Leena Latafat)

A teenager has been pronounced dead after a shooting in Scarborough on Friday evening, Toronto police say.

Officers responded to reports of gunshots fired at 6:45 p.m. in the residential area of Bellamy Road and Porchester Drive, near Eglinton Avenue East. They say six shots were reported.

A male victim was found lying on the ground without vital signs.

Paramedics transported the victim to the hospital via emergency run, but he later succumbed to his injuries.

Paramedics later said the victim was a teenager.

Video footage of the scene shows blood stains and clothing on a staircase leading to an apartment building on Bellamy Road.

An area resident said they knew the victim and described him as “a nice kid.” John, who only wanted to be identified by his first name, told CP24 the teenager had stopped by his apartment to charge his phone 45 minutes before he died.

“I heard him call somebody on my phone and say ‘yeah, okay I’ll see you in a bit.’ And then I thought I heard him call a taxi,” John said. “About 45 minutes later I found out he was shot.”

“He’s never bothered anybody as far as I know. I can’t see him being involved in anything. I think it must have been mistaken identity.”

Police have not yet released information on a suspect.