TDSB on track for most violent year on record if trends continue: report

TDSB on track for most violent year on record if trends continue: report

The Toronto District School Board (TDSB) resumed a special meeting on Wednesday evening aimed at addressing violence in schools following a report that found the 2022-’23 school year would be the most violent on record if trends continue.

The TDSB held a virtual meeting on Monday with the intent to discuss a report, prepared by TDSB staff, on school safety in the wake of numerous violent incidents at schools across the city over the past few months.

Instead, the meeting lasted for more than four hours and was tabled without resolution after board members, parents and community activists all weighed in on how to handle violence in and around Toronto schools.

The report was brought forward towards the end of the meeting, leaving trustees and community members without time to ask questions about it, however the report’s contents are expected to be discussed in detail at tonight’s 9 p.m. meeting.

The report outlines what the board considers a violent incident, which are: possessing a weapon, including possessing a firearm, physical assault causing bodily harm requiring medical attention, sexual assault, robbery, using a weapon to cause or to threaten bodily harm to another person, extortion and hate and/or bias-motivated occurrences.

“Using this definition, the number of violent incidents on TDSB school premises is increasing, even while the total number of suspensions is decreasing,” the report said.

“For the 2022-23 school year, if the current trend continues, the board will be reporting the highest number of violent incidents since the data has been collected in 2000.”

Prior to the report’s introduction, community members, parents and delegations comprising activist groups, former students, teachers and other stakeholders spent hours discussing how the issue of violence in schools should be dealt with.

The main point of contention at the meeting was whether or not the school board should consider putting police officers back in schools in an effort to deter violence.

Previously, the TDSB had stationed police officers in Toronto schools as part of the controversial School Resource Officer (SRO) program, which was launched in 2008 after 15-year-old Grade 9 student Jordan Manners was shot and killed at C.W. Jefferys Collegiate Institute in North York.

The program was scrapped by the TDSB in 2017.

Trustees voted to end the program after many students, particularly Black, Indigenous and students of colour, reported feeling uncomfortable and intimidated by the police presence.

Activists say the same problems will arise again if officers are placed back in schools and that it would be a mistake to reinstate the program.

“We definitely saw overwhelming support of folks ensuring that we do not bring back police in school programs, namely the SRO program, in any form or manner and not expand police presence at the TDSB and rather actually invest in what is evidence-based - and that is not policing,” Andrea Vásquez Jiménez, director and principal consultant of Policing-Free Schools told CP24 on Tuesday.

“The issue is, many folks who may have this Eurocentric way of thinking, equate safe and safety with police and policing. But the reality is, when we're looking at data, research and reports, the evidence actually shows that having police in schools is detrimentally and negatively impacting many students, many of them [being] Indigenous, racialized, neuro-divergent, disabled, of the LGBTQ communities, undocumented students, among other intersectional identity markers.”

Some community members at the meeting shared their own experiences as students in TDSB schools when the SRO program was in place, describing instances when they felt targeted or intimidated by their school’s officer.

Others, including many parents, said putting police back in schools as a temporary measure may help to decrease the amount of violent incidents that have been increasing over the past few months.

On Halloween, 18-year-old Jefferson Peter Shardeley Guerrier was shot and killed outside Woburn Collegiate Institute in Scarborough as school was being let-out for the day. Another 15-year-old boy was shot and injured in the same incident.

Two weeks later, a Grade 12 student was left critically injured after being stabbed at around the same time of day at Scarborough’s Birchmount Park Collegiate Institute. 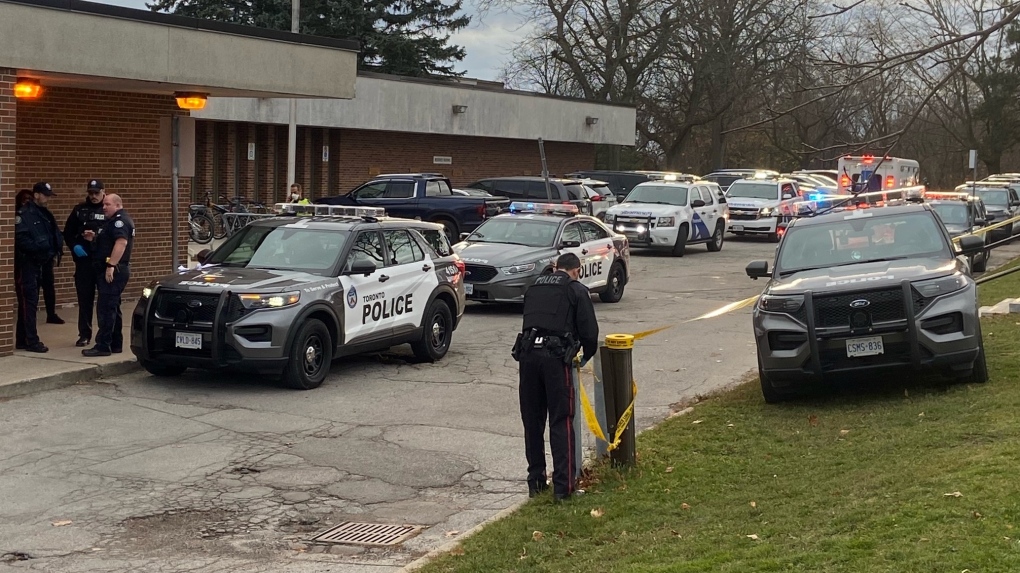 TDSB spokesperson Ryan Bird says in light of these incidents and others, the board has already taken numerous steps to ensure the safety of students in Toronto schools.

“We are taking a number of steps, whether it be additional staff on both the caring and safe school side, starting with safety monitors and child and youth councillors and workers, so there's a plan to look at this from a system perspective,” said Bird.

The TDSB is also specifically focusing on York Memorial Collegiate Institute in the city’s west end, where a number of violent incidents have been reported in the past few months, culminating in a staff walkout in early November that saw the school’s principal and several other staff members not show up to work due to ongoing safety concerns.

Earlier this month, York Memorial students staged a walkout of their own, demanding a safer learning environment and more student supports.

“At York Memorial, we've added a number of additional staff and we’re looking forward to being able to confirm [a new] principal and vice principal this evening and share that news with the community. We have added school-based safety monitors, there’s central staff, we've appointed an executive advisor, really whose sole focus is to help support York Memorial,” Bird said. 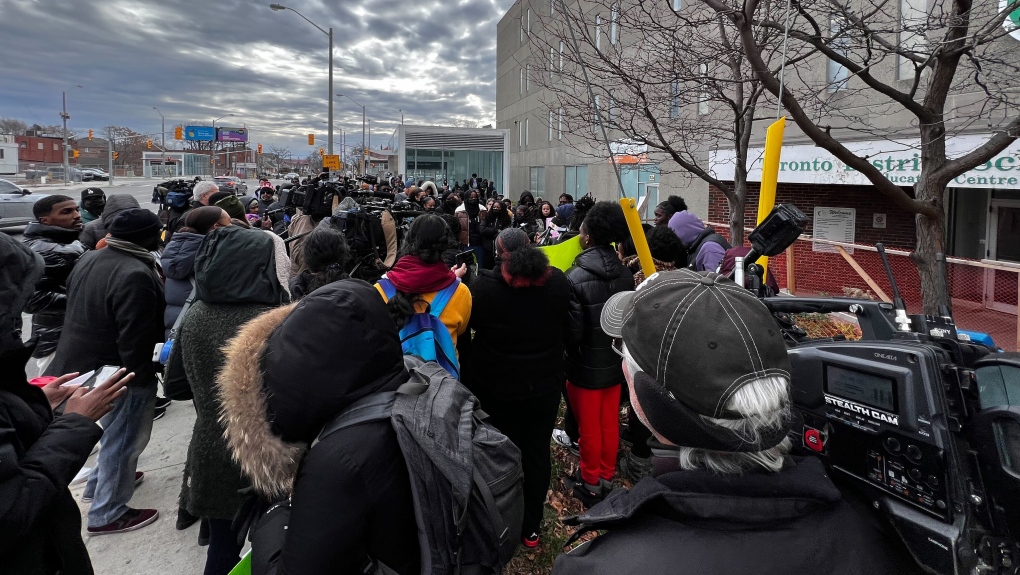 “[We’ve also added] someone from the Center of Excellence for Black Student Achievement, so there are a number of different staff that are at York Memorial now to help not only support students but staff as well in the larger community.”

However, Bird says the TDSB can’t ensure the safety of students in schools across the city on their own and will need help from community organizations and multiple levels of government.

“I think we do have to look to community partnerships, other community organizations, faith-based organizations and other levels of government that we can work with to really address some of the root causes of this,” Bird said.

“Yes, we play an important role and we are taking a number of steps; adding additional staff to keep schools safer than they are. But we really do need to be able to work with community partners.”

Mayor John Tory said on Tuesday that he supported the SRO program when it was in place but added that it may have needed some “refinement or improvement.”

“I think now what we have to do, given that we've moved on from that and the TDSB said no police officers in schools, is to look at other ways in which we can use the police or use other people,” Tory said.

“We need to make schools safer, that's all there is to it.”

Bird says despite the cancelation of the SRO program, the TDSB still has a good relationship with Toronto police, particularly when there are urgent safety concerns in schools. However, he says the board has no plans to reinstate the program for the time being.

“As far as moving forward, there's no staff recommendation to return to the SRO program and I'm not aware of any trustee motions at this point that would see the reintroduction of the SRO program in its previous form,” Bird said.

“Right now we're working on a number of multifaceted plans to make sure that we're addressing school safety and that means that yes, it does include police as far as contacting them for urgent measures, but also community organizations, added staff, school-based safety monitors, the mental health and wellbeing part… so it really is a multi-pronged approach to try to address this.” 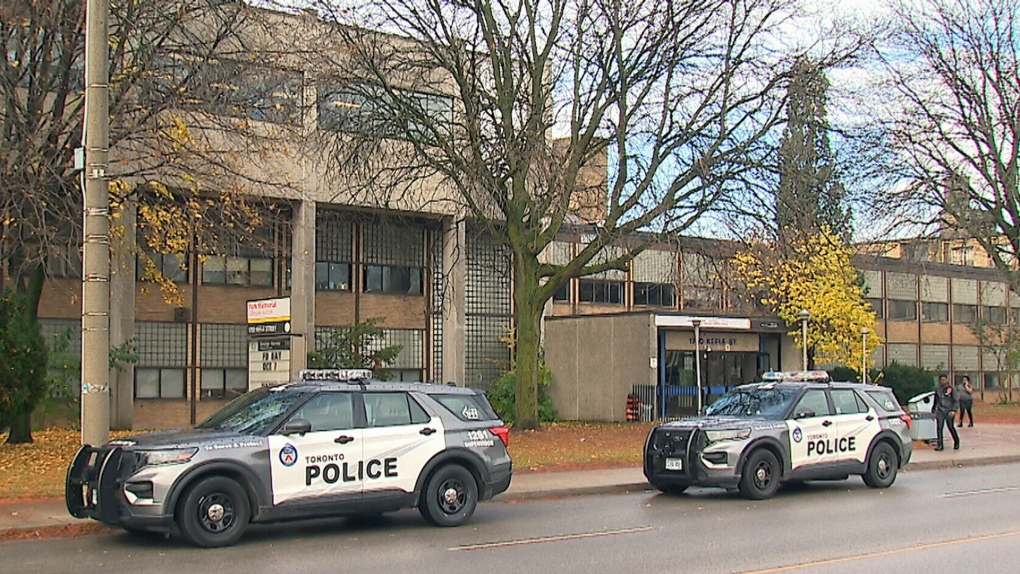 Toronto police cruisers can be seen in front of York Memorial in this undated photo. (CTV News)