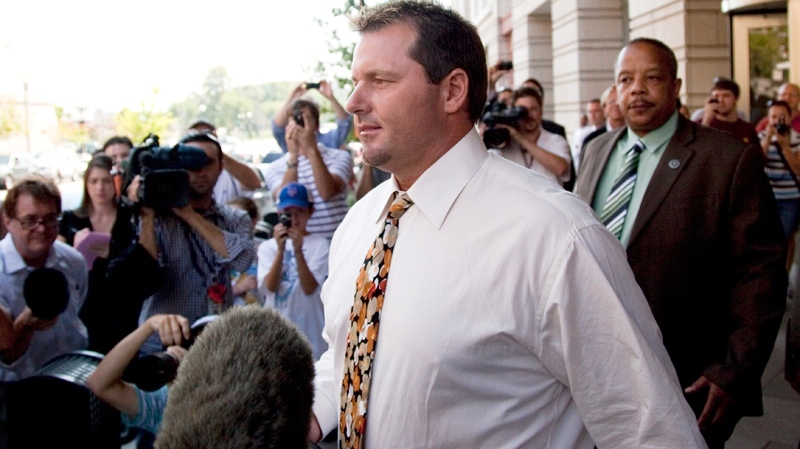 According to Toronto police, they were assisting the United States Department of Justice in their investigation into Clemens' alleged use of steroids and human growth hormone during the time he played with the Toronto Blue Jays in the 1997 and 1998 seasons.

"The U.S. Department of Justice asked us for assistance, we provided assistance -- a court order was issued and we gave them the documents," Const. Tony Vella, a Toronto police spokesperson, told CTV.ca on Thursday. Police handed over the documents on June 21.

Vella would not say what the documents entail, citing the ongoing investigation.

The U.S. Dept. of Justice said a court order prevents prosecutors and defence lawyers from commenting while the investigation is in progress.

Clemens, whose nickname is "the Rocket," is facing the following charges for allegedly lying to the U.S. Congress in 2008 about whether he used performance-enhancing drugs:

Clemens won two of his seven Cy Young awards, awarded to the best pitcher in baseball, while playing for the Blue Jays. His career ended in 2007 with 354 wins and more than 4,600 strikeouts in 23 seasons.

In 2007, the Mitchell Report on the use of performance-enhancing drugs by pro baseball players alleged that Clemens had used such substances, but the ex-pitcher's lawyer noted that Clemens has never tested positive for steroids use.

Brian McNamee, Clemens' former trainer with the Jays, has claimed he injected the pitcher with steroids.

"Let me be clear. The answer is no," Clemens told the U.S. Congress House Committee on Oversight and Government Reform during his 2008 testimony. "I did not use steroids [or] human growth hormone and I have never done so."

Clemens has said McNamee had injected him with vitamin B-12, but not steroids.

Andy Pettitte, a one-time New York Yankees teammate of Clemens, told congressional investigators that Clemens had confided to him about using human growth hormone (HGH). Pettitte, who admitted to using HGH twice, was also a client of McNamee.

Clemens has said that Pettitte didn't accurately remember their conversation.

If found guilty, Clemens would likely face a maximum penalty of 21 months in prison and fines totaling more than US$1.5 million.