Swoop cancels 23 flights over four days due to 'unscheduled maintenance' 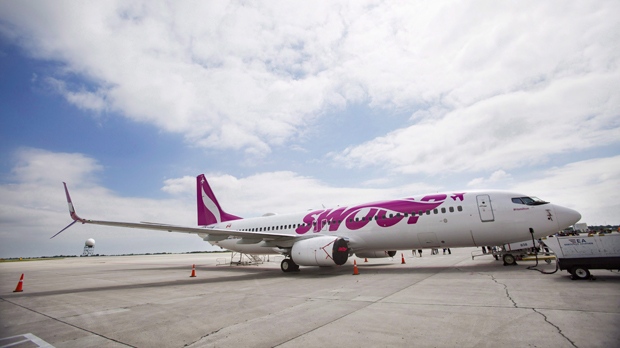 Swoop airline is facing a backlog of flights after engine trouble on an aircraft touched off a four-day wave of flight disruptions that has left passengers stranded and angry.

Passengers who had booked flights with the ultra-low-cost airline were left scrambling after it cancelled 23 flights between July 5 and July 10 due to "unscheduled maintenance" on a defective engine.

Swoop policy requires the low-cost subsidiary of WestJet Airlines Inc. to reroute passengers on other airlines if it cannot rebook them on its own flights "within a reasonable amount of time."

The policy applies to events "within Swoop's control," which the maintenance issues were, according to spokeswoman Karen McIsaac.

She said the vast majority of passengers were rescheduled on Swoop flights and that it would deal with requests for rebooking on another airline "on a case-by-base basis."

The company partly blamed the Boeing 737 Max aircraft grounding for preventing it from chartering other aircraft to accommodate stranded travellers.

"We are exploring options to charter aircraft to assist with the relief, however there are few options to do so as availability is limited in light of the MAX grounding," McIsaac said in an email.

Authorities across the globe banned the Boeing aircraft from their skies last spring after two crashes -- in Indonesia in October and Ethiopia in March -- killed all 346 passengers aboard, including 18 Canadians.

Frustrated travellers took to social media, complaining that the carrier rebooked them on Swoop flights up to five days later and that its customer care centre was closed over the weekend.

The Canadian Transportation Agency, asked whether it would launch an investigation, said it "is monitoring the situation."

The transportation watchdog said it has received two complaints so far, but noted that "what constitutes 'a reasonable amount of time' might depend on the situation, and this may have to be determined by the agency."

"Those that wish to cancel can do so for a full refund," she added.

The maintenance problem affected one of Swoop's seven aircraft, requiring an engine replacement due to a leaky oil seal on a Boeing 737-800 jetliner, McIsaac said. "This requires a significant amount of work and disassembly in order to fully repair the issue."

The aircraft has a capacity of 189, meaning more than 4,300 passengers would be affected if all 23 flights were booked up.

The disruption is affecting flights from Edmonton, Halifax, Hamilton, Orlando, Fla., and other cities.

Gabor Lukacs, head of the Air Passenger Rights advocacy group, said that under federal rules intended to beef up air traveller protections and set to take effect this year, Swoop passengers would receive no compensation due to a regulatory "loophole."

The rules impose no obligation on airlines to pay customers for delays or cancellations if they were caused by mechanical problems discovered in a pre-flight check -- walking around the aircraft before takeoff looking for defects -- rather than during scheduled maintenance required after 100 hours cumulatively in the air.

"They're saying the aircraft broke down, basically, that this is a maintenance issue," Lukacs said, referring to Swoop.

"This is exactly why the new aircraft rules are a failure. In this case, under the new rules, passengers would not get compensation. They would not see a dime."

The past week hasn't gone smoothly for Swoop. On Thursday night, local police were called to Hamilton airport -- "just to keep the peace," said spokeswoman Const. Lorraine Edwards -- after a flight bound for Las Vegas was cancelled and rescheduled for Friday evening.