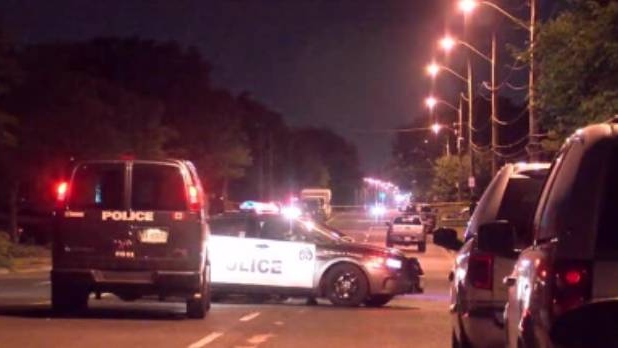 Police vehicles are shown at the scene of a shots fired investigation in Scarborough early Saturday morning.

TORONTO -- Police are continuing to look for a suspect who led officers on a brief foot pursuit following a shooting in Scarborough overnight.

Police were called to the Ellesmere and Morrish roads area at around 11:35 p.m. on Friday for a shots fired call.

Witnesses tell CP24 that they saw a car crash into a tree and that the driver then got out and started shooting.

Police say that officers who responded to the call located a suspect and engaged him in a foot pursuit.

The suspect, however, managed to evade apprehension.

York Regional Police provided their helicopter to help look for the suspect but their efforts were not successful.

Police say that a loaded firearm was found at the scene along with some ammunition.

The suspect is described as black, about six-feet tall and around 30 years old. He was last seen wearing a black hoodie.

No injuries were reported as a result of the shooting.