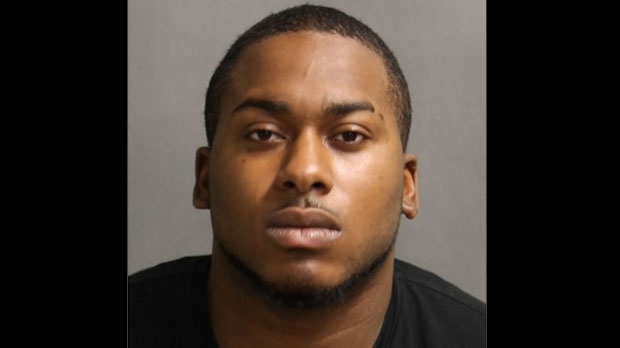 Simeon Harty, 22, of Toronto, is seen in this photograph provided by Toronto police.

A man wanted in connection with a fatal shooting in Scarborough last month has surrendered to police.

Twenty-three-year-old Kevin Nicholas Gidden was shot while sitting inside a vehicle in Scarborough’s Woburn neighbourhood shortly before 1 a.m. on Oct. 27.

According to police, Gidden and a friend were at a gas station in the area of Lawrence Avenue East and Orton Park Road when they "crossed paths" with a male suspect.

Investigators allege that when Gidden and his friend drove away, the suspect followed the pair for a short distance before firing a number of shots into their vehicle.

Gidden, who was a passenger in the vehicle, sustained gunshot wounds to the head and body. His friend who was driving was not injured.

The friend drove to nearby 43 Division and Gidden was rushed to hospital by paramedics. He died of his injuries on Saturday.

Gidden had no prior dealings with police, investigators said.

On Sunday, investigators identified a suspect wanted in connection with the fatal shooting.

In an update provided Tuesday night, police confirmed that the suspect had surrendered to police at around 5 p.m.

Simeon Harty, 22, of Toronto, is charged with first-degree murder and attempted murder.

He is scheduled to appear in court Wednesday morning.

- With files from CP24’s Codi Wilson.