Suspect charged in Oakville shooting that left man in hospital; 2 others outstanding 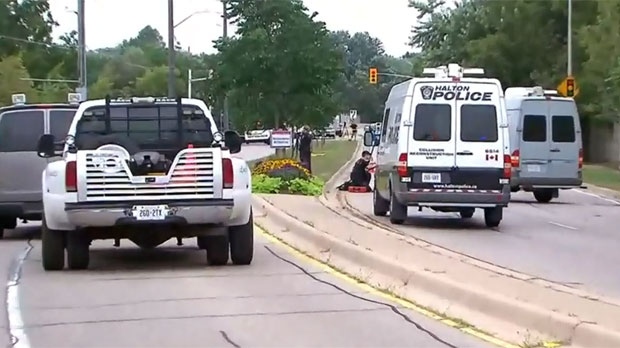 A suspect has been charged in connection with a shooting in Oakville earlier this week that left a 35-year-old man fighting for his life in hospital.

Shots were fired in the area of a shopping plaza at Cornwall and Trafalgar roads on Aug. 4 at around 11 a.m.

The victim, who was seen having breakfast at a diner moments before he was shot, was rushed to hospital following the shooting. Halton Regional Police said Sunday that he remains there in critical condition.

A suspect who fled the scene on foot was apprehended a short distance from the scene of the shooting.

Police announced Sunday that he has been charged in the incident.

Montreal man Marley Dorphelus, 21, is facing a charge of attempted murder in connection with the shooting, police said.

He made a court appearance via video link Saturday and was remanded into custody.

Two other suspects are still outstanding.

The first is described as black male who stands around six feet tall and weighs around 200 pounds. He has a slim build and was wearing dark pants and a dark shirt.

The second is described as a black male standing between five-foot-nine and five-foot-ten inches tall, with his hair in tight cornrows. He was last seen wearing white shorts and a shirt.

Police have said they believe the incident was targeted.