An Etobicoke woman who survived a collision in 2016 that killed three members of her family says she is now dealing with an immigration issue that is keeping her surviving family from returning to Canada.

Later that summer, Blerta Vokshi’s brother came to Canada from Albania to support his sister.

“I need people around,” Blerta Vokshi told CTV News Toronto. “I had my mom, my sister, my niece—which the accident took their life.”

Blerta Vokshi added that both she and her son have difficulty sleeping and being alone.

“I have to wake up, I have to get out from home—and my brother (will) come with me to walk outside, his wife stays with my son.”

Her brother, Hasim Vokshi, and his wife and son moved to Canada the following month on a temporary resident permit to provide familial support. 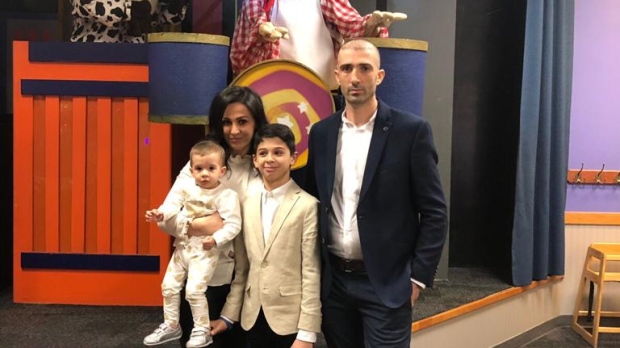 Hasim Vokshi and his family is seen in this undated photograph provided to CTV News Toronto. (Submitted)

This summer, both families returned to Albania, where the crash victims are buried. They say they checked on their eligibility to travel before leaving the country.

“Before we go back to Albania, we go to immigration … to ask the question if my brother is allowed to travel with this document or not,” Blerta Vokshi said.

Blerta Vokshi says a supervisor told them that they would be allowed to return to Canada, even highlighting a line on the documents that reads “departure from Canada WILL NOT invalidate this Temporary Resident Permit under Regulation 63(b)”.

But when they arrived at the airport in Frankfurt to head back to Canada, airline officials wouldn’t allow Hasim Vokshi and his family onboard the plane, saying they didn’t have the proper documentation.

Since being denied re-entry to Canada, Hasim Vokshi has applied twice for a new temporary resident permit. Both times the applications have been denied.

Documents shown to CTV News Toronto list a belief that Hasim Vokshi would not leave Canada at the end of his stay as the reason for the denial.

Blerta Vokshi says her brother and his family had previously applied for permanent residency under humanitarian and compassionate grounds, but those applications were denied.

Blerta Vokshi said that she approached the Minister of Immigration, Refugees and Citizenship, and Sophie Grégoire Trudeau, the Prime Minister’s wife, to make personal appeals that her family members be given permanent residency.

Stephan Curkowskyj, constituency assistant for Etobicoke Centre MP Borys Wrzesnewskyj, says that their office has been working with the Vokshi family since July 2016. The family met with the office seven times since July of this year.

Crukowskyj said the office couldn’t provide case-specific details, but did tell CTV News Toronto that the temporary residence permit does not allow re-entry into Canada should a person leave the country.

Blerta Vokshi, who faces more surgeries related to the injuries she sustained in the crash, calls the immigration fight a “second trauma”. She said she doesn’t know how she will survive without her family to support her.

“I'm asking (the) government (to) bring my family here. I don't have no one in this world anymore. No one.”