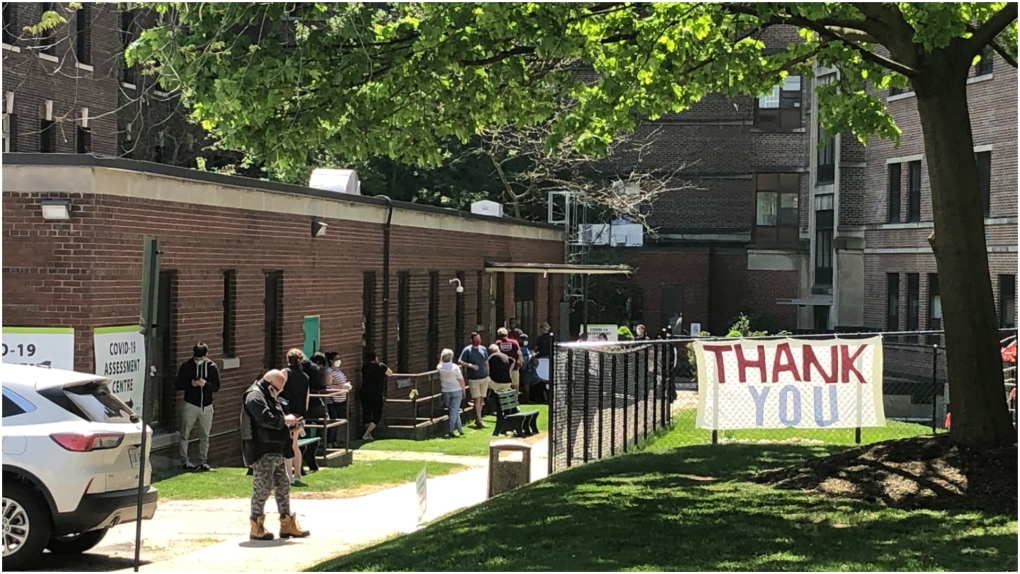 People wait outside of Michael Garron Hospital in East York on Monday to get tested for COVID-19. (CTV News Toronto/Beth Macdonell)

TORONTO -- People lined up for several hours at some COVID-19 assessment centres in Toronto on Monday, a day after Ontario Premier Doug Ford encouraged residents to get tested —event if they don’t have symptoms—if they believe they may have been exposed to the novel coronavirus.

Michael Garron Hospital (MGH) estimates that it saw more than 100 patients in five hours, a sharp increase compared to the 100 patients typically seen over a 12-hour period.

“We have scaled resources to accommodate the major surge in volume and have put good plans in place for the rest of the week to continue to minimize waits,” spokesperson Andrea Nameth told CTV News Toronto.

“It’s busy for sure,” said Tanja Schmid, who was tested Monday at MGH. “This was quite a long wait. We were here for two hours,” she added.

“It took me three hours to get through; I was outside most of the time. There were two lines, one for people who had appointments and one for walk-ins,” said Mike Gaito, who was also tested at the East York hospital.

For those with an appointment, the hospital said patients should expect to be in and out within about 30 minutes.

The increase in patient traffic is not limited to Michael Garron Hospital. Staff at Humber River Hospital say they are also experiencing a rise in patient visits.

“A significant surge today. About 50 patients waiting before the centre was open and about twice the volume we’ve seen in previous days,” said Dr. David Fishbein, acting chief of staff and medicine.

The hospital said it’s centre is ready to do more testing and that the increase is a good thing.

“I think the more we know about the virus the better, we don’t have a good sense of the prevalence of the virus in the community and this area in particular is seeing a lot of admissions to hospital,” said Fishbein.

As well, CTV News observed patients being turned away at a drive-thru testing centre in Etobicoke. Some patients say it took more than five hours just to be seen at the assessment centre run by the Williams Osler Health System.

Despite that, many who spoke with CTV News Toronto welcomed the opportunity to know their COVID-19 status for peace of mind.

Rahim Khakoo said he was prepared to wait all afternoon and into the evening.

“As we add more labs to our integrated network, the capacity will continue to increase. We are confident that we have both the capacity and the supplies to accommodate increased testing volumes,” she said.

Chazan said that labs are providing test results to patients generally within 24 to 48 hours.

However, it should be noted that the province has been operating well below that capacity in recent days. In fact, the province only completed 8,170 tests in the last 24-hour period.