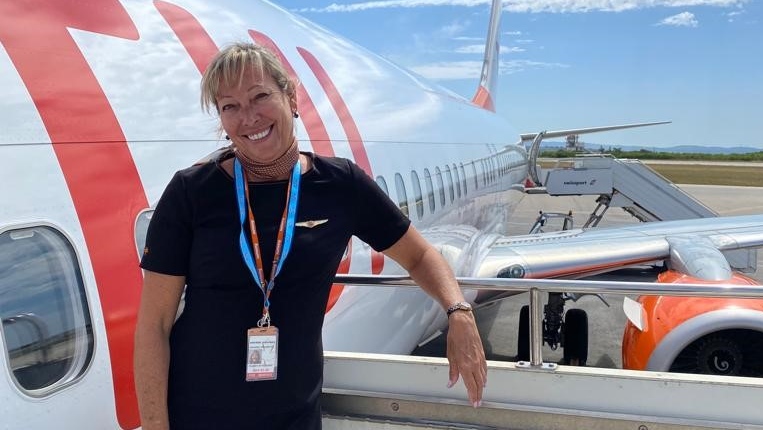 A Sunwing flight attendant saved a passenger's life who went into cardiac arrest as a pilot made an emergency landing at Toronto Pearson International Airport this week.

On Tuesday, Rodrigues was preparing for a standard landing of a Sunwing flight from Cancun to Toronto while on duty as the Cabin Safety Manager (CSM).

Then, a call light flashed a few times near the middle of the plane. As she got closer, she saw a woman having a seizure. Her body was in full convulsion.

“I noticed that her fingers and around her mouth and face started to turn blue and purple and her face was gray,” Rodrigues said.

“I had to take her from her seat, put her down on the seat, lay her down and start CPR immediately.”

Sunwing confirmed that a passenger was in medical distress on the flight from Cancun to Toronto on Tuesday.

“The crew immediately attended to the affected passenger, along with a nurse and medical student on board the flight, and the Sunwing Airlines Cabin Safety Manager on duty, Marisa Rodrigues, conducted chest compressions on the passenger as the flight crew declared a medical emergency and the aircraft prepared for its descent into Toronto,” a Sunwing spokesperson told CTV News Toronto on Thursday.

Together with a nurse and medical school student who responded to the call, they lifted the woman from her seat and laid her down on the floor of the plane.

Rodrigues positioned the woman’s head between her legs and proceeded to push air into her lungs before they placed oxygen and an automated external defibrillator (AED) on the passenger.

“As that was being placed on…we realized that she had a heartbeat…it was very, very shallow and very, very low,” she said.

But, Rodrigues added, “She came through.”

As the plane approached Pearson Airport, the captain declared a medical emergency landing in order to push to the front of the line of aircraft arriving at the airport.

“Because of the time frame that it happened, we didn't need to divert anywhere,” she said.

Sunwing confirmed that paramedics then met the aircraft upon arrival in Toronto to provide further medical attention to the passenger.

“We are extremely grateful for the quick thinking, care and attention provided by our cabin crew, led by CSM Marisa Rodrigues, and the other passengers who assisted during a stressful situation while remaining focused and calm,” the airline said in a statement.

It was the first time in 18 years she had ever done compressions on a passenger. She said medical episodes have happened with travellers fainting and facing anxiety.

“But nothing to this extent, ever.”

The U.S. Senate passed bipartisan legislation Tuesday to protect same-sex marriages, an extraordinary sign of shifting national politics on the issue and a measure of relief for the hundreds of thousands of same-sex couples who have married since the Supreme Court's 2015 decision that legalized gay marriage countrywide.