Students walk out of Toronto school amid 'constant chaos,' violence

Students walk out of Toronto school amid 'constant chaos,' violence

Students walked out of a Toronto high school they say has become the site of “constant chaos” in which students detail deplorable conditions, teachers say it’s violent and parents are demanding action from the school board.

At a walkout staged outside of The Toronto District School Board (TDSB) office on Friday, York Memorial Collegiate Institute students described a constant police presence, bathrooms without toilet paper or sanitary products, and classrooms that are construction zones.

“When you walk into school, it feels like a prison,” a Grade 12 student said on Friday afternoon.

“I have never seen anything like this happen in my whole entire high school experience. As a student, I’m very angry.”

Students gathered to demand a “safe and stable” learning environment, which they described as void of a police presence and racial violence, a school brimming over capacity and staff not showing up to class. On Thursday night, parents attended a TDSB meeting to address these ongoing issues.

"She's scared to death to go to school, "the mother of a Grade 9 student said at the consultation. "She's coming home saying, 'Mom, I could have died today."

Members of the school's administration, including the current principal, did not show up for work last month, citing an unsafe work environment.

At the time, staff members told CTV News Toronto that bathrooms had become “fight clubs” and alleged sites for drug use. A lockdown took place on Nov. 15 following reports of a person with a gun. 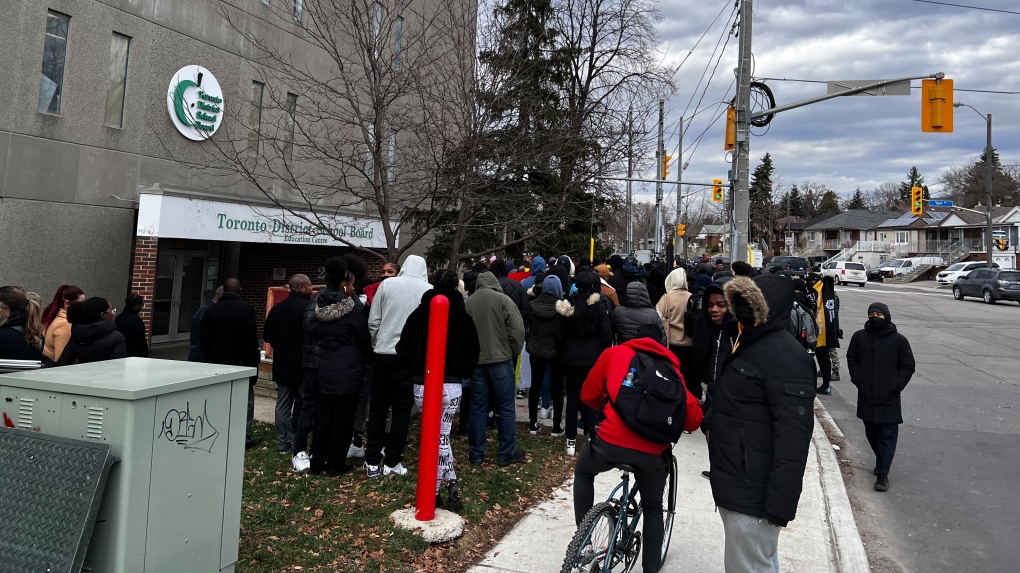 After the protest, a letter was sent to parents and guardians providing updates on the actions being taken by the TDSB. They include the announcement of new permanent principal and vice principals, continued work to hire permanent teachers and the addition of supervision and counselling supports.

In addition, the board said the school leadership team will ensure there is a clear process that students, families and staff are aware of to report incidents of racism.

“While there is still much work to do, we are starting to make much needed progress at the school and it is my hope that that will become much more evident in the days ahead,” wrote executive superintendent Dr. Uton Robinson.

Also in the letter, the board said it is exploring virtual learning opportunities for students who “would be better served and would still earn credits to assure successful completion of their year.”

Ontario Premier Doug Ford was asked if he was planning to intervene in the violence taking place at York Memorial while at a news conference on Friday.

“If there are any violent crimes, that goes back to the federal government to make sure that when someone gets charged, that there's mandatory sentences.”

For the Mayor’s part, John Tory floated the idea of an official police presence in the school as a possible solution.

“I supported the old way of having the police in schools, but I realize that was controversial and the school board took it out. But is there a different way in which we can have police help to keep schools safe?” he said at an unrelated news conference Friday.

Tory said he plans to reconvene with representatives of the TDSB and Toronto police following a meeting earlier this week to further address the issue.

Canadian study suggests we may be underestimating children’s memory capabilities

New research from York University suggests that we may be underestimating what kids are capable of when it comes to their memories.