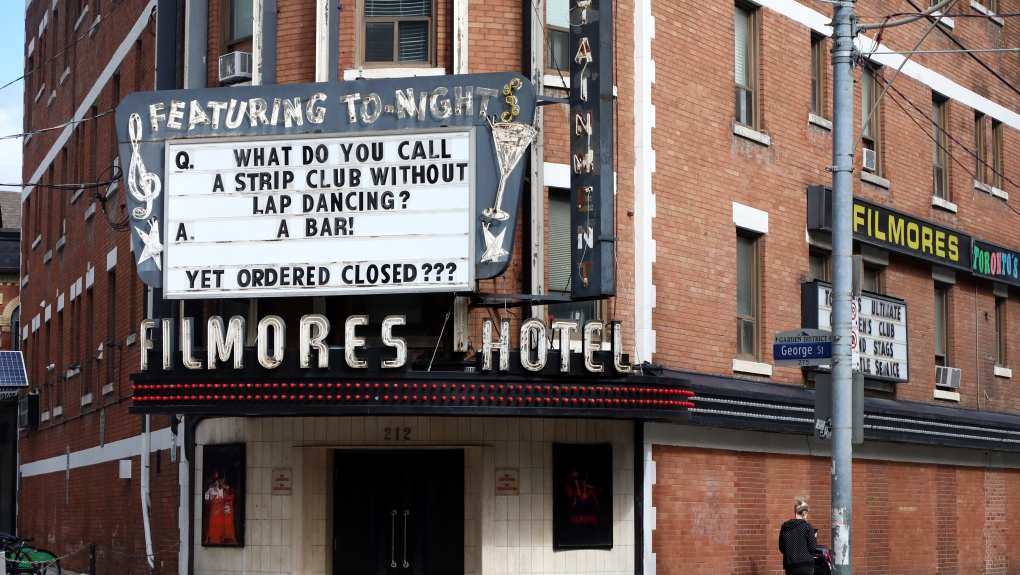 A prominent downtown Toronto strip club is seen on Tuesday, Sept. 29, 2020. Workers and advocates say Ontario's forced shutdown of their workplaces was done without consultation and applies an unequal standard to an already stigmatized industry.THE CANADIAN PRESS/Colin Perkel

TORONTO -- An advocacy group representing Ontario strippers is asking a judge to declare the province's closure of all strip clubs in response to COVID-19 unconstitutional.

The group argues that the measure impacts strippers' charter rights to freedom of expression and association in a safe, secure environment, and their right to work freely in their chosen environment.

It further argues the industry-wide shutdown arbitrarily targets strippers because there were other reasonable options available to the government that weren't considered.

The group claims there was no legal or jurisdictional basis for the province to close strip clubs, which are regulated on the municipal level and subject to federal laws, and alleges the move was politically motivated.

The provincial ministry of health and attorney general's office did not immediately respond to a request for comment.

The group, in its court filings, references media coverage of COVID-19 outbreaks at two Toronto strip clubs in August and September that preceded the Sept. 26 shutdown announced by Premier Doug Ford.

"The decision to enact the impugned provisions relate to incidents that arose out of the city of Toronto and represent an overbroad and discriminatory nature to target strippers and, more broadly, sex workers, with a reasonable apprehension of bias or bias," the document says.

The document also says strippers in Toronto had a legitimate expectation of consultation based on past practice, but weren't consulted ahead of time on the measures.

"This application is about the unlawful, arbitrary, and biased nature to target strip clubs and in particular, strippers," the notice reads.

A statement from Work Safe Twerk Safe said the group is concerned about the treatment of Ontario strippers.

"We feel that the decision to close strip clubs specifically relates to discriminatory and stereotypical assumptions about strippers as vectors of disease," the emailed statement said.

"We should have been consulted about our thoughts on occupational health and safety and reopening safely to begin with."

This report by The Canadian Press was first published Oct. 26, 2020.