TORONTO -- Catholic schools across Ontario were closed Tuesday, as were high schools and elementary schools in several public boards, with teachers in three out of the four major unions holding one-day strikes.

Those unions, as well as the one representing teachers in the French system, say they are frustrated with a lack of progress in contract negotiations with the provincial government.

"We're out here today because we believe we need to be sending a strong message about the government's regressive cuts to education, around the impact it's having on our students and our students' learning," said Liz Stuart, president of the Ontario English Catholic Teachers' Association.

"It's never an easy decision, but effectively what we thought about was, we're not just thinking about today or tomorrow or next semester, we're thinking about the future."

The teachers say class size increases and the introduction of mandatory e-learning courses are among the sticking points, but Education Minister Stephen Lecce says compensation is the main barrier.

Lecce said job action by the teachers is having negative impacts on families.

"It is why we are calling on these union leaders to end these strikes, given the adverse effects on students and financial hardship on parents," he said in a statement. 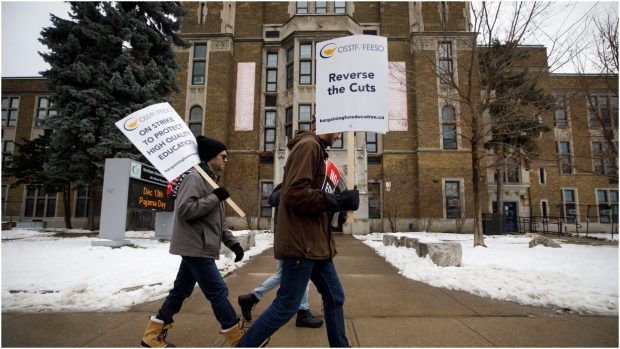 Layla Dowlut, a Grade 9 student in Toronto, was one of thousands of teenagers at home Tuesday, catching up on school work. She said other than a cancelled dance and a few tests or assignments moved to different days she hasn't seen much impact from the strikes.

"I think if they continue then it will have a bigger effect on all of us," Dowlut said.

Public high schools in the city have been closed on three different days since mid-December due to one-day strikes, and teachers have been on a work-to-rule campaign since November. Dowlut said she thinks it's good the teachers are standing up for what they believe in.

"I think the government should really just listen to what the teachers have to say because they're really fighting for us," she said.

The pressure on the government may temporarily ease after this week. Though high school teachers have been engaging in weekly rotating strikes, they have said there will be none during next week's exam period for schools on a semester system, and OECTA has made the same vow.

Stuart said she hopes the government will return to bargaining with a renewed commitment to "maintain and improve our publicly funded education system."

"We'll take a step back and really think about what is the best next step for us and our members and the students they serve and we'll make those decisions over the next few days," Stuart said.

This report by The Canadian Press was first published Jan. 21, 2020.