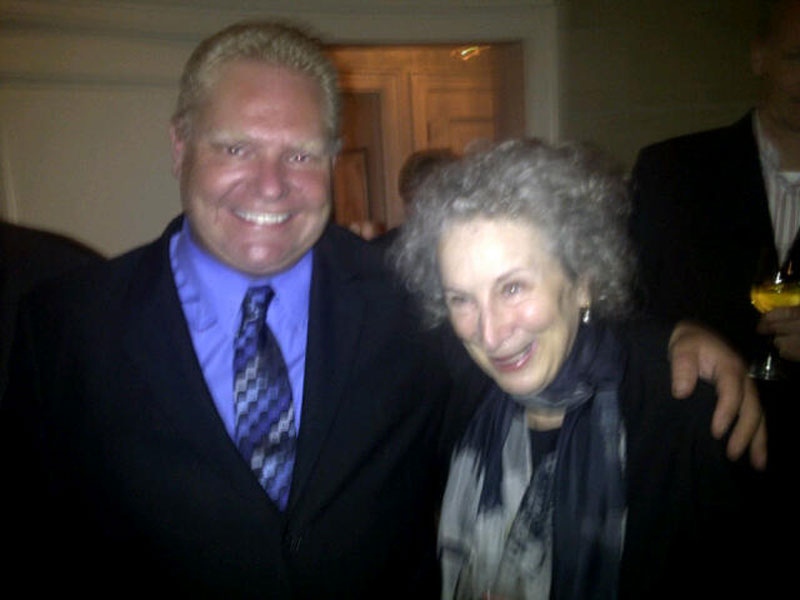 Counc. Doug Ford once said he wouldn't recognize Margaret Atwood if she passed him on the street, but he came face to face with the famous author at a party Tuesday night.

The two were invited by Counc. Michael Thompson to a farewell party for Jeff Melanson, the mayor's arts adviser, who is moving on to another job.

Neither Ford nor Atwood knew the other would be there.

When they met, Thompson took a quick picture with his phone and later sent it to CTV News as proof of the encounter.

Atwood, a frequent presence on Twitter, also posted a tweet about the party. She also teased Ford over a comment he made about there being more Tim Hortons locations in his area than libraries.

"T-pals, UnBLeevAbul! I just met D. Ford! At a NotTimmies Arts Party! (He knows what I look like now! :D)," she wrote, adding that Mayor Rob Ford said no libraries would be cut as the city looks to slash services.

Though the two met for the first time on Tuesday, Ford and Atwood have been in a long-drawn public fight over a cost-cutting proposal that suggested the closure of some of Toronto's public libraries.

In late July, Atwood took Ford to task on the subject over Twitter. In response, Ford told reporters he didn't know the literary icon.

Just a day before the pair met, Mayor Rob Ford made an about-face on the contentious cut and said he wasn't ready to close any library branches.