Stephen Lecce, one of Progressive Conservative Leader Doug Ford’s highest profile candidates, is apologizing after a report emerged about him participating in a fraternity house “slave auction” when he was in university.

Lecce, who served as education minister in the most recent provincial parliament, issued a two-line apology Tuesday night after a report about a 2006 Sigma Chi event at Western University, which was called a “slave auction,” was published by Press Progress, a news website founded by the left-leaning Broadbent Institute.

In his apology, Lecce, who was a member of the fraternity’s chapter at the time, did not deny his involvement in the event.

“The event from 2006 was inappropriate and in no way reflects who I am as a person, which is why I unreservedly apologize,” Lecce said.

“I will continue to passionately advance the interests of all Ontarians — irrespective of faith, heritage, orientation or race.”

In a web archived version of what appeared on Sigma Chi’s website at the time, obtained by CTV News Toronto, Lecce penned a statement congratulating incoming members.

“Our alumni brothers who range from academic scholars, corporate executives, philanthropists, politicians and community leaders continue to live the values they have learned through Sigma Chi many years ago,” Lecce wrote.

To the right of his message appeared the fraternity’s “Chapter News,” which listed events including the 2006 “slave auction.” Lecce’s name was also listed as a “slave” at the charity event. 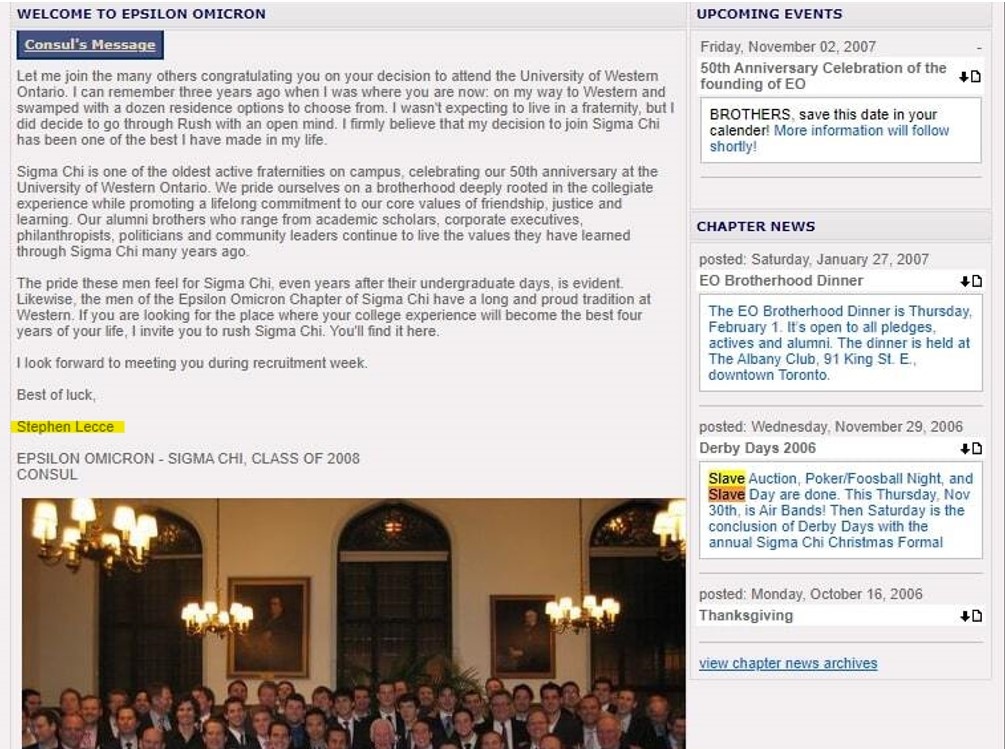 A statement penned by Stephen Lecce, which appeared on Sigma Chi's website, is captured from a web archived version obtained by CTV News Toronto. His apology comes as he seeks re-election in King-Vaughan in Ontario’s provincial election.

When Ontario Liberal Leader Stephen Del Duca was asked about Lecce’s apology on the campaign trail on Wednesday, he said he could not comment given his position of privilege.

“I understand he's apologized, but I think it is best left to racialized Ontarians, vulnerable Ontarians, who are in a position of having to deal with this kind of behavior far too often, for them to be in a position to respond to whether or not his apology is good enough,” Del Duca said.

“I have to say that our former Black caucus members, the founders of our Black caucus, put out a statement last night and I stand by that statement 100 per cent,” Horwath said on Wednesday.

In the joint statement, several Ontario NDP candidates in Toronto called on Lecce to withdraw from running for office, calling his actions “repulsive” and “clear anti-Black racism.”

“Under no circumstances should the people of this province, or even more alarmingly our children, be represented by him at this time,” Toronto-St. Paul’s candidate Dr. Jill Andrew said in the statement with NDP candidates Faisal Hassan and Dr. Laura Mae Lindo.

“Doug Ford and the PC party must remove him. We are also calling on Doug Ford, as the Leader of the PC party, to clearly and unequivocally condemn Mr. Lecce’s actions."

Karen Littlewood, the president of the Ontario Secondary School Teachers' Federation, said she was shocked and upset when she learned about Lecce's participation in the auction.

"The transatlantic slave trade has had a legacy that continues to play out, but to think about a Minister of Education who's participated in basically mocking the slave trade, trivializing it, I'm really incredibly concerned just about the ability going forward in order to be able to deal with anti-Black racism and the inequities that exist in the system today," Littlewood said in an interview with CP24.

She added that Lecce's apology does not go far enough and said he needs to do more. Littlewood noted that if Lecce gets re-elected and continues to be the minister of education, he should commit to dismantling anti-Black racism in schools.

When asked if Lecce should step aside, she said, "Ministers have stepped aside for far less, in my opinion. We're talking about the damage that's been done for many years repeatedly to black people in Ontario, to black citizens around the world."

"I think really, people have to question who's going to be representing them at Queen's Park," Littlewood added.