TORONTO -- Ontario will need to implement stay-at-home orders and administer more vaccines to curb the spread of COVID-19 and its variants in the third wave, according to the province’s science advisory table.

In new modelling data released Thursday, the table said that such orders will help to control the surge, while also protecting access to medical care and “the chance of the summer Ontarians want.”

According to data released by the province Thursday, there are currently 433 patients in an intensive care unit with COVID-19. At least 259 of those patients are breathing with the assistance of a ventilator.

In an open letter to the Ontario government published earlier today, more than 150 emergency room doctors alleged that the province’s current COVID-19 framework is not stunting case growth, but instead allowing the disease and its variants to “run free.”

Premier Doug Ford announced Thursday that the government will shutdown the province for at least a month starting on April 3 in response to the recent growth in cases and hospitalizations related to the novel coronavirus.

However, the measures stop short of the stay-at-home orders recommended by the science table (which were previously imposed following the Christmas holidays) and still allow for such non-essential activities like retail shopping and outdoor gatherings with public health restrictions in place.

COVID-19 cases could fall between 1,000 to 1,500 a day by the end of April if the province activates a shutdown for four weeks, the table said. If no further public health measures are implemented, daily case counts could rise to 6,000 by the end of April.

Right now, the province’s seven-day average for number of cases recorded is 2,341, up from 1,794 one week ago.

ICU admissions related to COVID-19 could reach 800 by May

The science table regularly presents multiple scenarios when presenting their findings and in Thursday’s report they noted that even with a four-week stay-at-home order and vaccinations in place, COVID-19 ICU admissions will likely reach 800 by the end of the month.

Dr. Adalsteinn Brown, the co-chair of Ontario’s COVID-19 science advisory table, said that at that point, doctors will be forced to make “hard decisions” about patient care.

“Eight hundred is a place where we are not able to provide all the care as well as we want to people,” Brown said.

“I don’t mean to use strong language, but that is a place where clinicians need to make hard decisions that we’d never want them to have to make, where you will see loss of life.”

As COVID-19 cases and hospitalizations surge across the province, most schools remain open.

Dr. Brown weighed the impacts of keeping schools open versus closing them and the resulting effects either would have on virus transmission.

“We know that if schools stay open, we will see more infection. But we also know that the impact on children of these interruptions in school is really hard and damaging. So it’s a challenging trade-off,’ Brown said.

Brown pointed to the loss of structure that comes with a school closure, which he said negatively affects student’s physical activity, sleep and mental health. Moreover, he said a switch to remote learning increases loneliness and social isolation while also decreasing the ability to detect potential neglect or abuse.

“Schools should be the last place to close and the first to open, but as international experience shows, if we don’t get the pandemic under control, we will have to take more drastic measures for longer periods of time,” Brown said.

Ontario’s education minister has maintained that schools remain a safe place for students and that a postponed March Break will go ahead as planned starting April 12.

The table also says that vaccinations in Ontario are not currently reaching the communities at highest risk of infection and, as a result, delaying the impact of inoculations as an effective strategy in containing the disease.

According to a chart presented by the science table, only 50 per cent of residents over the age of 80 in areas of Ontario with the highest incidence of COVID-19 infection have received the shot.

“It’s important to recognize that getting vaccines to where they’re needed the most can be a complex endeavour,” Brown said.

“There’s a number of tools initially that can help, but it requires a lot of planning and a lot of support. So I’m not saying this is an easy target but its an important target to pursue as we try to get vaccines where they will have the greatest impact in our communities."

Ontario’s COVID-19 vaccination rollout has been plagued by an ongoing supply shortage as the federal government continues its work to procure doses internationally.

Only residents in Ontario over the age of 60 that don’t belong to, or work in, a high-risk environment are currently eligible to get the shot.

The province says that 317,715 people in Ontario have received both doses of a COVID-19 vaccine and are now considered immunized against the disease. 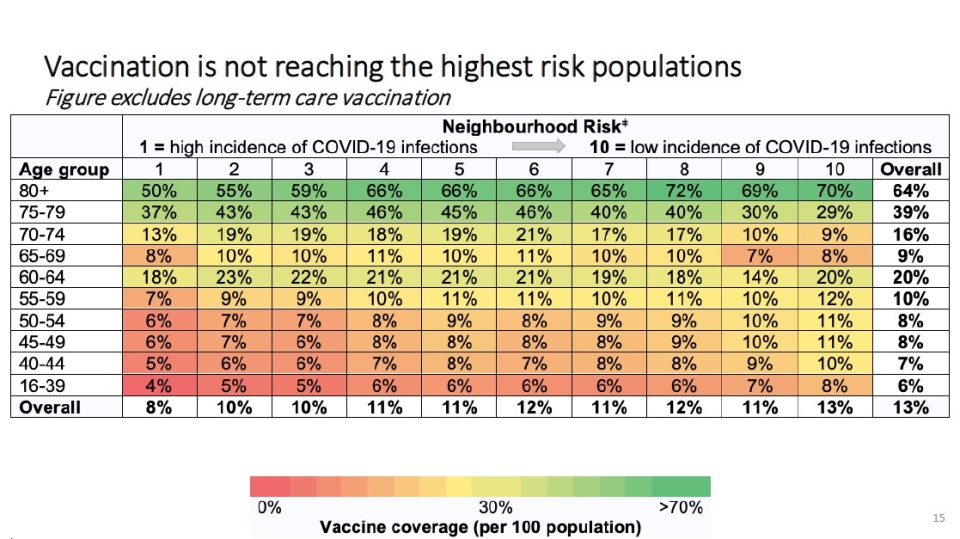