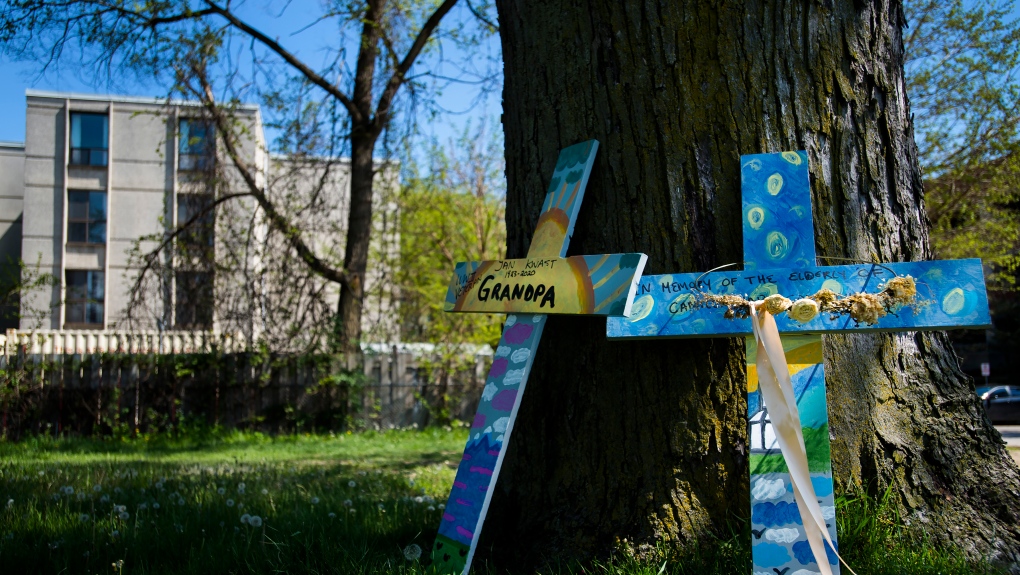 Crosses are displayed outside a long-term care centre marking the deaths of multiple people that occurred during the COVID-19 pandemic. THE CANADIAN PRESS/Nathan Denette

TORONTO -- Ontario long-term care homes dealing with staffing shortages and absentee leaders were more likely to have a higher risk of mortality during the first wave of the pandemic, an independent commission has heard.

The researchers presented their findings to the commission on March 3.

The commission heard that 573 of the province's 623 long-term care homes, or 92 per cent, responded to the survey, giving what the researchers said was the clearest picture yet of the situation in Ontario's nursing homes.

That new data, combined with existing data provided by the Ministry of Health, allowed the researchers to create four models to try to figure out which factors played significant roles in the deadly COVID-19 outbreaks that swept through scores of nursing homes.

"Our work demonstrated the criticality of a vital health workforce, both at a baseline level as well as workforce with ability to scale-up safely in times of crisis," said Natalie Damiano, the institute's director of specialized care.

"The physical presence of leadership in long-term care homes, including the consistent presence of a medical director, is needed to prevent poor outcomes."

Causation cannot be determined from the analysis, the researchers noted, only associations.

The researchers found there was both a higher risk of mortality and higher severity of illnesses from COVID-19 in homes where the medical director was present less than one day per week.

"The finding around the medical director is hugely important, I think, because what we've got here is a very clinically complicated population at maximum risk levels for adverse outcomes for COVID," said Dr. John Hirdes, a professor with the school of public health at the University of Waterloo and a close collaborator with the institute.

The commission has previously heard that numerous medical directors and other physicians did not enter the homes during the first wave of the pandemic. Many of them worked remotely and some refused to enter the homes for fear of contracting the virus.

Areas with higher COVID-19 rates in the surrounding community was also an important factor in both mortality rates and more severe illnesses inside long-term care homes.

The researchers also analyzed the hardest-hit homes -- the 26 long-term care homes across the province where 20 per cent or more of the residents died from COVID-19, the commission heard.

The researchers found only two factors played a role in those homes with very high resident mortality.

The first is whether or not the facility was short 25 per cent of their personal support worker staff on any given day between March and June 2020, said Luke Turcotte, a senior researcher with the institute's advanced analytics team.

The second factor was whether or not the home used agency staff on seven or more days in a given month.

"These findings highlight the importance of staffing, particularly personal support workers, to the health and well-being of residents," Turcotte said.

This report by The Canadian Press was first published March 12, 2021.