TORONTO -- Some travellers arriving in Toronto say their calls are being disconnected after waiting hours to book a mandatory quarantine hotel.

The federal government’s new policy, which came into effect on Feb. 22, requires people flying into Canada to pay upwards of $2,000 for a three-day stay at a federal government approved hotel while waiting for their mandatory COVID-19 test results.

Ontario resident Branden Mullins said he’s been on the phone for days trying to book a hotel for his upcoming flight from Pennsylvania to Toronto this weekend.

He shared screenshots of his call logs with CTV News Toronto that showed he had been on the phone for three hours twice on Wednesday only to have his call dropped both times.

Canadian trying to return to #Canada. Trying my best to book my quarantine hotel through the government and they hang up on you after 3 hours and 2 minutes on hold. Twice now @JustinTrudeau pic.twitter.com/dj2geMQs8p

“It's frustrating. I honestly I feel like a lot of this is against my rights as a Canadian citizen,” Mullins said. “It makes me not so proud to be a Canadian. I feel very intimidated to come back to my country, return home. They did not make this an easy process.”

A spokesperson for the Public Health Agency of Canada told CTV News Toronto that many of the calls are coming from people who are trying to book months or weeks ahead of their trip, which is overwhelming the system.

“A significant portion of the calls coming to the booking line are from people enquiring about booking hotel rooms in March and April,” spokesperson André Gagnon said.

“Travellers should not be calling to reserve a government-authorized hotel because they plan to travel in the future. If your flight to Canada is scheduled within the next 48 hours, call to reserve and pay for your mandatory three-night hotel stopover.”

Sagar Sharma, who spoke to CTV News Toronto from Bahrain, said that fewer than 48 hours before his sister’s flight, he was anxiously trying to get through to an agent to book a hotel.

He said his sister was flying to Toronto for the first time to attend university on Thursday. His phone logs, shared with CTV News Toronto, show his calls were dropped repeatedly after lengthy wait times. 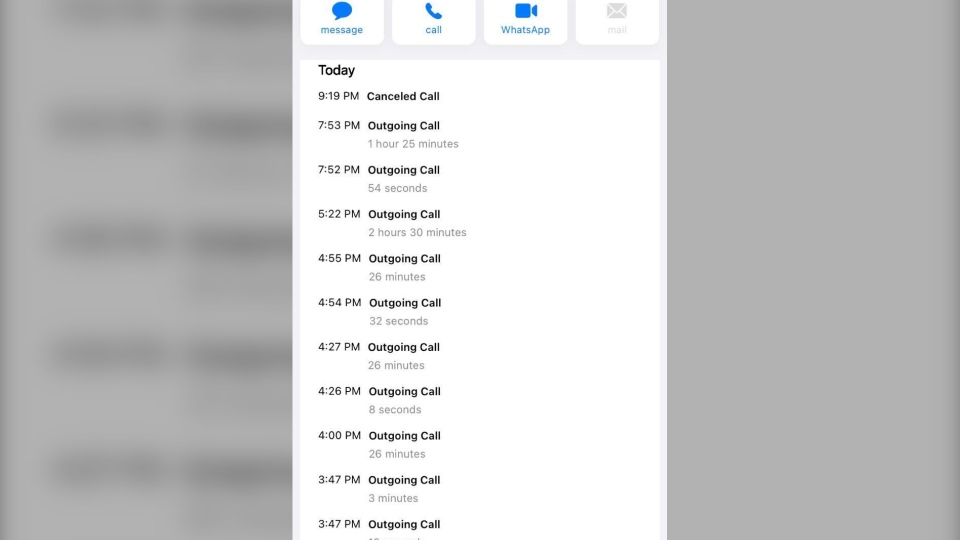 “She's a little anxious and exhausted. Everyone is stressed at home,” Sharma told CTV News Toronto. “It's been really tough so far. We didn’t know what to do. We were just hoping that someone picks up the call on the other side.”

He said the night before his sister’s flight, the family was finally able to get through and book a hotel. He said his family is facing a costly phone bill due to the multiple, long overseas calls.

The federal government said that more than 45,000 calls were made to the phone booking system since Feb. 19, and, so far, only 2,277 rooms have been booked.

“This is drop from day one and two where calls were dropped and tech had hard time keeping up,” Gagnon said.

However, people contacted by CTV News Toronto, including Mullins and Sharma, as well as others posting on social media, have said they are waiting more than three hours to get through, and calls are still being dropped.

This is infurating. What a mess. I've spent another 10 hours or so waiting for someone to pick up the phone. How can this be even considered a solution. The hotels don't want or cannot help either. This is total BS

So impressive. Who was the genius who brought up the decision that travellers entering Canada book their mandatory hotel stop-over BY PHONE!!! Are we living in 90s or what??? Like hotel quarantine is fineeee, but only when there is a way to get a room booked! @JustinTrudeau pic.twitter.com/HGUKvUEaFc

The government says people who are not able to book their hotel over the phone can still take their flights and someone at the airport will help them with their booking.

Minister of Intergovernmental Affairs Dominic LeBlanc told reporters at a news conference on Tuesday that international travellers who fail to book a quarantine hotel before arriving to Canada could still be subject to fines under the government's Quarantine Act.

The Public Health Agency of Canada has said that the fines for breaking the Quarantine Act can go up $750,000 and/or six months in prison.

He said border agents will be able to decide whether or not to impose the fines on people who had tried to book a hotel but failed due to issues with the booking system. He said the government is working to improve the system.

Mullins said he was told he would face a fine of $1,200 for arriving without a prescheduled booking.