TORONTO -- A snowfall warning has been issued for parts southern Ontario as a major winter storm is expected to bring a significant amount of snow to the region.

Environment Canada said that in Toronto between 15 and 25 cm of snow is forecast to fall before Thursday morning.

The snow is forecast to be quite heavy at times and will significantly impact visibility on the roads.

Here's when the snow will fall

"It will be an easy drive in to work and school today. It's going to be the drive home and into the evening that’s the problem."

"Overnight will be the worst of it. That’s where we could see 15 cm of snow."

Knight said that at the storm's peak, there will be heavy bursts of snow through the region. He added that areas north of Toronto could be hit with even more snow.


East of Toronto, in the Peterborough and Kawartha Lakes area, Environment Canada is forecasting snowfall amounts between 20 and 30 cm by midday Thursday.

In the Haliburton area, up to 40 cm of snow are possible and motorists are being advised to consider against non-essential travel.

In Hamilton, Kitchener and London anywhere between 10 to 15 cm of snow if forecasted to fall.

Snow squalls likely through until Friday

"Additionally, strong snow squalls with heavy snow and blowing snow are expected to develop Thursday afternoon east of Lake Huron and may extend into the Golden Horseshoe," Environment Canada said on Wednesday. 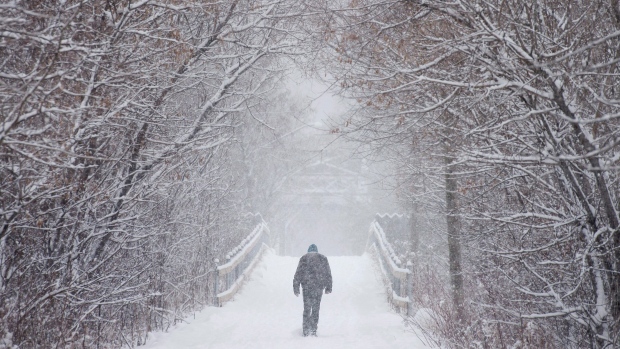 "Be prepared to adjust your driving with changing road conditions."

"Visibility may be suddenly reduced at times in heavy snow. There may be a significant impact on rush hour traffic in urban areas."

We're working hard to clear the snow and keep our runways operating throughout today's snow event. If you're flying today, remember to contact your airline and confirm your flight status! #ONStorm pic.twitter.com/hmiCgcOc55