Slow commute as Toronto gets slammed with more snow 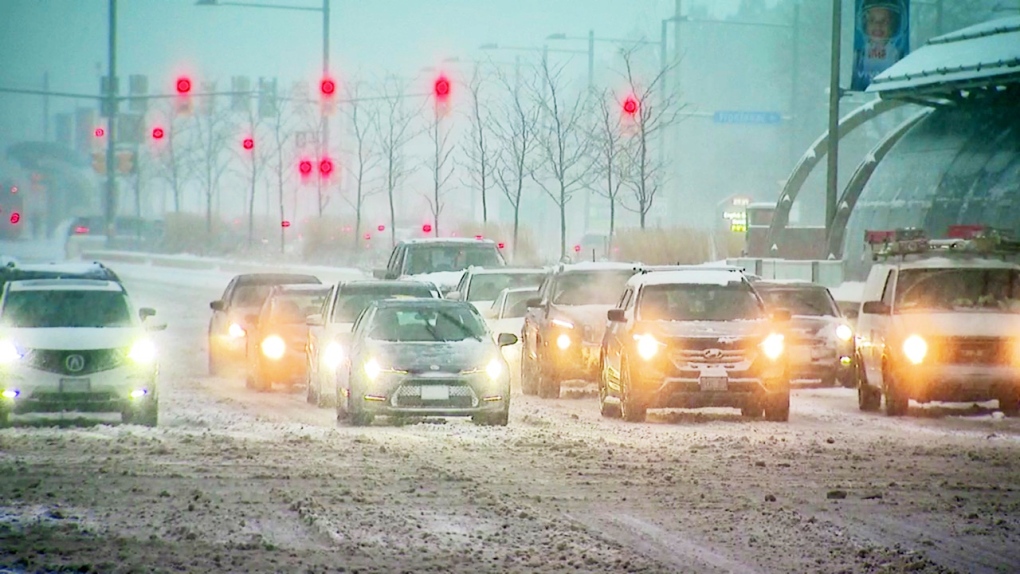 Driver across the GTA are facing a messy commute as the latest blast of winter hits the city. (Craig Berry / CTV News Toronto)

TORONTO -- Drivers faced a challenging commute this morning as the city got hit with more snow.

Environment Canada had issued a winter weather travel advisory for Toronto and the GTA in anticipation of the system that was expected to dump five centimetres of snow on the city over the course of Friday morning.

“The system doesn’t have a tonne of moisture associated with it. Most of us will pick up about five centimetres by the end of the morning while a few areas may pick up closer to seven, or eight or nine (centimetres),” CP24 Meteorologist Bill Coulter said. “Just keep your wits about you. It is not the storm of the century; it is just some light continuous snowfall that will grease up the roads this morning.”

The city began applying salt brine to hills and bridges on Thursday night with rock salt trucks starting their work at around 4:30 a.m.

Salting and plowing operations on sidewalks commenced then commenced at around 6 a.m. It is expected to be completed by 9 p.m.

Speaking with CP24 on Friday morning, the city’s superintendent of road operations Mark Mills said that all hands were on deck in anticipation of the storm.

He said that luckily the storm mostly unfolded as predicted.

“We are ready, we are always ready no matter what Mother Nature brings – we do have the resources available should the weather change – but this one was as predicted and we are good right now,” he said.

No uptick in collisions

Police were warning drivers to use extra caution on the roads amid the snowfall, though no significant uptick in collisions was reported so far.

“Right now the call volume that we have for collisions is actually relatively low. We only have about half a dozen crashes on the go at this time all the way from Niagara to Barrie so certainly we are not doing too bad,” OPP Sgt. Kerry Schmidt told CP24 at around 6:30 a.m. “The road conditions are wet, though. There is a lot of snow on the ground and on the shoulders. Keep in mind you do need to drive to these conditions.”

The snow is expected to taper off by noon.

The temperature on Friday will reach a high of 0 C but it will feel closer to – 6 with the wind chill.