TORONTO -- A six-year-old boy and his mother were "exactly in the line of gunfire" as Toronto rapper Houdini was shot to death in broad daylight, a homicide detective said Thursday.

Police have released surveillance camera footage of what the detective called an "active gunfight" on a downtown sidewalk. 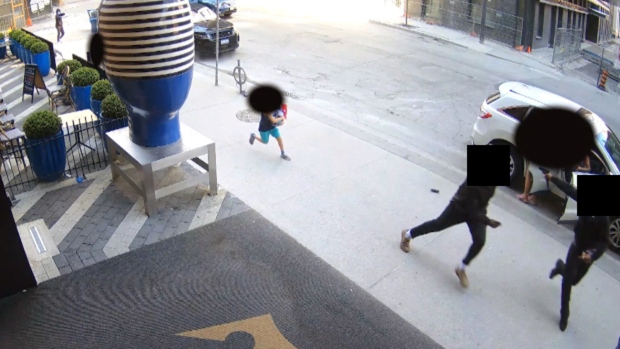 “The little boy ducks into the vestibule here while these associates are returning gunfire to the shooter,” Det.-Sgt. Andy Singh said during a news conference while the video played on the large monitor beside him.

“The little boy was exactly in the line of gunfire when it first started and the family, which can be clearly seen in the background, were in the receiving end of the volley of shots.”

The bullets “skipped off the ground,” Singh added, “inches from not only the little boy, but also the mother.”

“As the shots are hitting the ground, you can see dust coming up.”

On Tuesday, just after 4 p.m., 23 bullets were fired between two groups just outside of the Bisha Hotel & Residences along Blue Jays Way, just north of King Street West, as many passersby, including the young boy and mother, watched and screamed.

Dimarjio Jenkins, a 21-year-old rapper known as Houdini, was killed in the shooting. 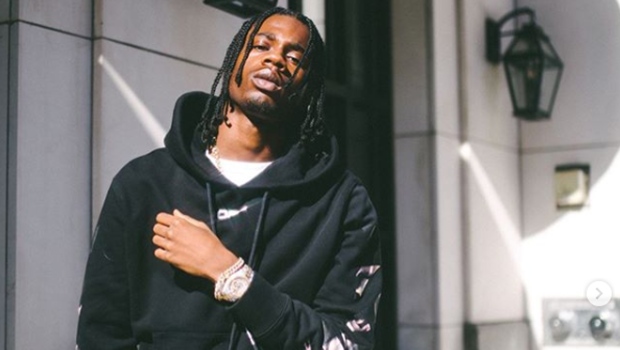 He has been described by those who knew him as a “kind young man,” who had a “very promising future in music.”

“He was an independent rising star widely considered on his way to ‘making it’ in the music industry and appreciation for his music already extended way past the GTA,” HipHopCanada’s founder and editor-in-chief Jesse Plunkett said in a statement released on Wednesday.

“Very few Canadian hip-hop artists have been able to achieve the views and streams independently that Houdini did, which makes the fact that he didn’t get to take his career to the next level even more devastating.”

Moments before the gunfire, Jenkins was captured on a surveillance camera walking on the east side of Blue Jays Way, heading northbound. He is wearing a grey sweater and black bottoms and is in the company of a 15-year-old boy and two others, identified by police as his associates.

A suspect vehicle, a rented blue Volkswagen Tiguan, was “lying in wait” for 40 minutes before Jenkins and the three others emerge in the area, police said. 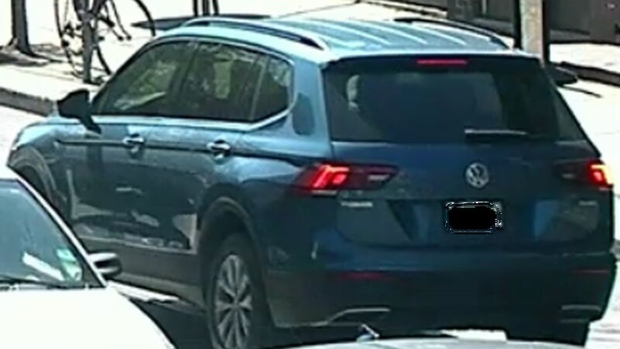 Singh said the vehicle “starts to turn and make a U-turn and come around” as Jenkins’ group crosses to the west side of the street, approaching the vehicle.

“At this point, a lone shooter emerges from the vehicle,” the detective said. “This shooter opened gunfire on Jenkins and his associates that were with him.”

Nearly two dozen bullets ring out from both sides as the shooter is seen running southbound on Blue Jays Way to the waiting vehicle, Singh said.

The same Volkswagen Tiguan was found torched in York Region late Wednesday night. It is now being forensically analyzed.

“What we believe occurred is that the shooter comes out of the vehicle, opens gunfire, and two associates of Jenkins return gunfire with their own handguns back at the shooter,” Singh said, calling the incident “an active gunfight happening on the sidewalk.” 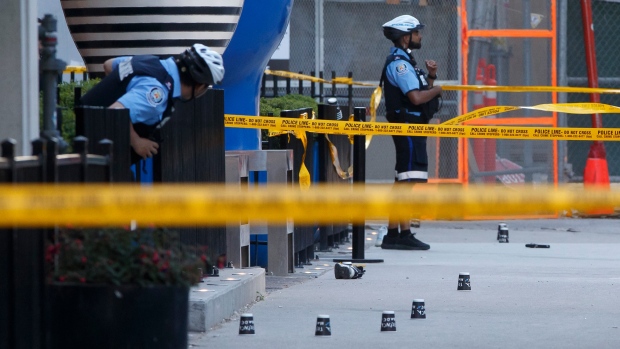 According to Singh, one of Jenkins’ associates was holding a handgun that had the capability of firing off 30 rounds.

The 15-year-old boy in the company of Jenkins was struck by a single bullet during the gunfight. He is expected to survive. Police said he returned gunfire in the incident and has subsequently been charged with firearm-related offences.

An innocent bystander, a 27-year-old woman, was also hit by gunfire during the shooting. She is not seen in any of the surveillance footage released by police on Thursday. She is also expected to survive.

‘A lot of lives could have been put in jeopardy’

Along with the 27-year-old woman, the six-year-old boy and the child’s mother, many innocent passersby were out on the downtown street on that Tuesday afternoon. 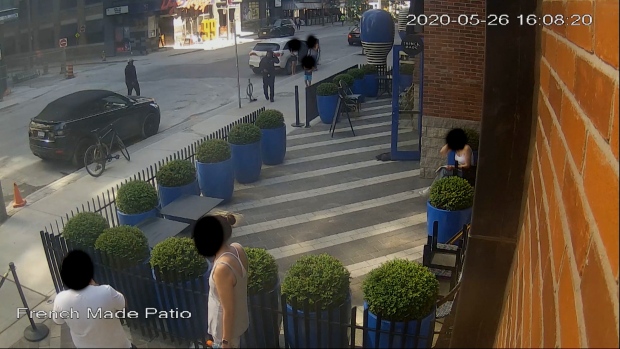 “There were numerous people that were in the neighbourhood, it was a nice, beautiful day, it was 4 p.m., it was broad daylight,” Singh said. “A lot of people’s lives could have been put in jeopardy because of what had transpired.”

The young boy is seen in footage released by police standing on the sidewalk as his mother puts items into their SUV. As shots are fired, he is seen running and then standing against the doorway of a building, steps away from his mother.

Singh said one round of bullets flew “just inches” from the young boy’s feet and another, had they been “slightly higher,” would have most likely injured the mother. 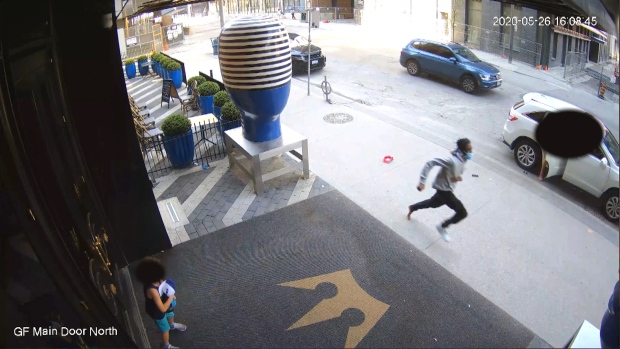 “We’re hoping that the public will see this heart-wrenching video, and specifically to the members that were in that vehicle, this is unacceptable, we had a very young family, specifically a six-year-old boy, who was in the area of this specific gunfire and this gunfight that occurred, many causalities could have occurred,” Singh said.

“There was no regard for life.”

The boy and his mother were not physically injured in the shooting.

Suspects have ‘no care in the world’

Speaking alongside Singh on Thursday, police Chief Mark Saunders said these suspect have “no care in the world, killing anyone in the way” and should not be on Toronto streets. 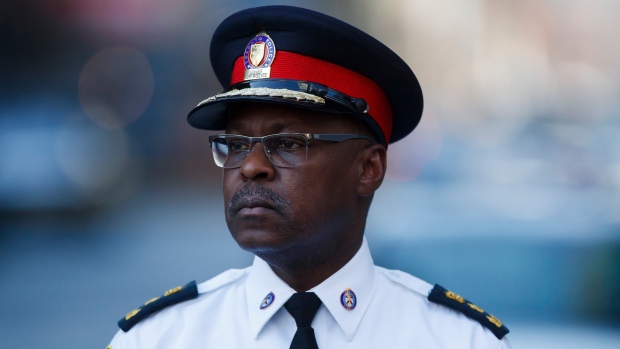 “I’m appealing that we, as a collective group, once again, not let these individuals get away with what they have done, what they almost did,” he said.

Investigators said they have yet to identify the gunman who initiated the shooting and released the surveillance camera footage “with the hopes that people who view it can provide information on the individuals that are involved in this homicide.” 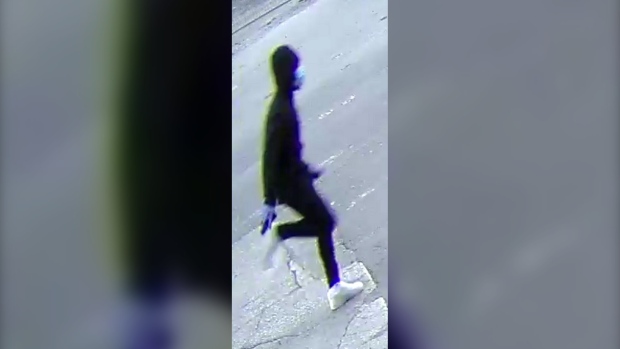 Police also released a surveillance camera image of one of Jenkins’ associates, who they alleged fired the high-capacity magazine, on Thursday.

On Friday, police said they have since identified this person and have established that he is a minor. Investigators then removed his photograph from their website, as he cannot be identified under the Youth Criminal Justice Act, and replaced the video released on Thursday with re-edited footage.

“If there is anyone who has any information, no matter how little it is, whether it’s video footage, we have high-rise buildings in the area, whether it’s cellphone footage, we need every single piece of evidence,” Singh said.

Police have not yet determined a motive for the shooting and said it is too early to tell whether it is gang-related.

Anyone with further information regarding this investigation is asked to contact police or Crime Stoppers.