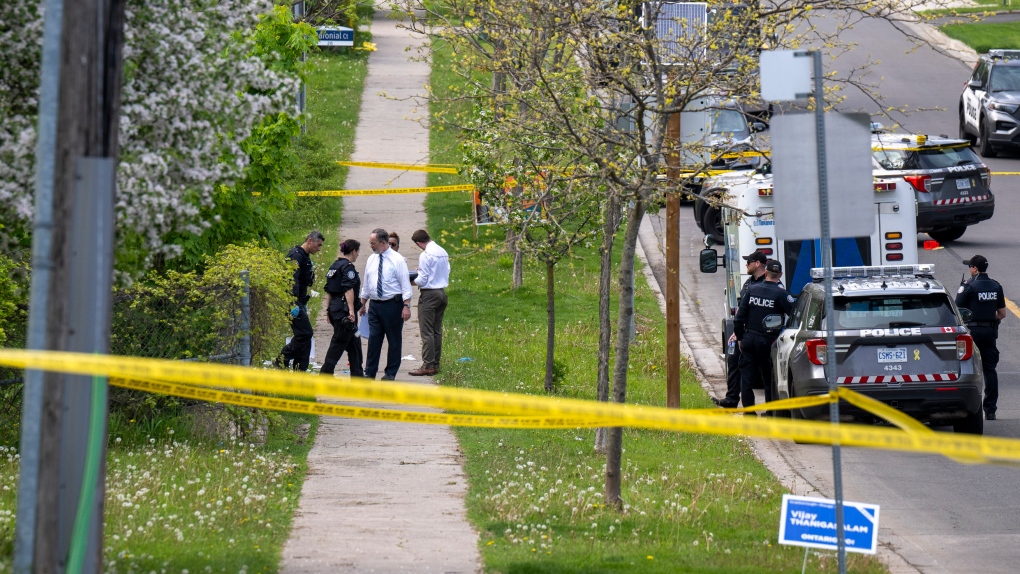 Police and investigators are seen at the scene of a shooting in Toronto, Thursday, May 26, 2022. Toronto police say a man has died after an interaction with officers during which a police gun was fired. THE CANADIAN PRESS/Aaron Vincent Elkaim

The province's police watchdog has cleared two Toronto police officers who shot and killed a man holding an air rifle during a standoff near an elementary school in Scarborough's Port Union area last spring.

The Special Investigations Unit (SIU), which is called to investigate the conduct of police that may have resulted in death, serious injury or allegations of sexual assault, released the result of its investigation into the May 26 shooting death of the 27-year-old man on Friday.

"As such, there was no basis for proceeding with criminal charges in this case. The file has been closed," Martino wrote.

The director explained in his report how he came up with his conclusion and detailed the circumstances that led to the shooting based on the collected physical evidence, forensic evidence, and video and audio recording evidence.

The incident began just before 1 p.m. when Toronto police were called to the area of William G. Davis Jr. Public School on East Avenue, north of Lawrence Avenue East, for a man with a firearm seen walking towards the school.

Officers rushed to the scene, and the school was subsequently put under lockdown. 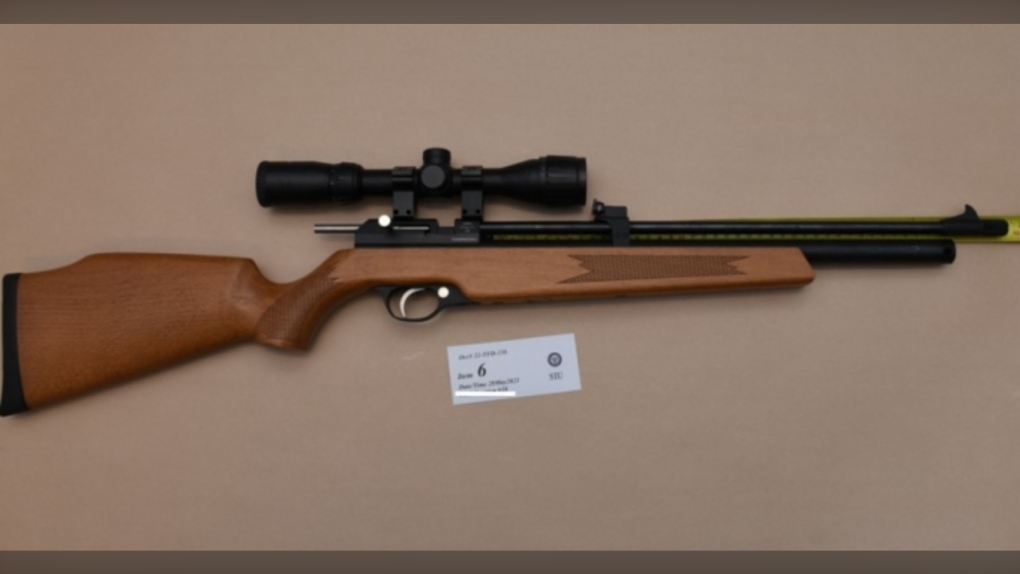 The air rifle used by man who was shot and killed by Toronto police on May 26, 2022 is seen in this undated photo. (Special Investigations Unit)

According to the SIU, the man walked "nonchalantly" with a .22-calibre air rifle with a riflescope, which was sometimes concealed in his jacket and other times was seen in plain view.

"The (man) suffered from mental illness, and had had a particularly difficult time the week prior coping with his mental health," the SIU said.

One of the officers yelled at the man and said: "Drop it!"

The SIU said despite the warning, the man kept holding his weapon, and within moments, he raised the rifle and pointed it at the officers.

The man was met with gunfire, the SIU said, with Officer 2 firing his semi-automatic pistol once.

The man was struck and staggered but was able to right himself. The SIU said he pointed his rifle in the direction of the officers again.

Officer 2 fired his pistol again, according to the SIU report, while at the same time Officer 1 fired his C8 rifle three times. 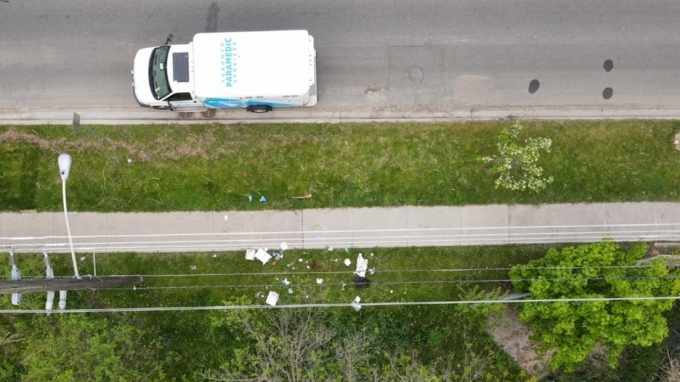 Photo shows the scene of a fatal shooting in Scarborough on May 26, 2022. (Special Investigations Unit)

The SIU said the man was struck in his torso, causing him to fall onto his back and drop his rifle.

The officers approached the man and began to administer emergency treatment. Paramedics and firefighters arrived shortly and resumed the life-saving efforts but were unsuccessful.

The man was pronounced dead. The SIU said the man's gunshot wounds were on his left shoulder, left flank, left hip and abdomen.

SIU said investigators later recovered 28 pellets in the pockets of the man's sweatpants.

One of the first officers who arrived at the scene, referred to in the report as Subject Officer 1, saw the man on a grassy area north of the school while driving by in his marked police SUV. The SIU said the man emerged from a treed and bushy area along the banks of a creek holding the air rifle.

Officer 1, the SIU said, told the man to drop his weapon as he drove by him. The officer would continue to drive a short distance away before stopping his vehicle.

Meanwhile, another officer driving a marked police Ford Taurus, referred to in the report as Subject Officer 2, saw the man by the side of the road. Officer 2 was accompanied by a third officer who was in the passenger seat.

The SIU said a standoff shortly ensued, with officers pointing their firearms at the man while covering behind their cruisers.

Martino noted that Officer 1 and Officer 2, who were the subject of the investigation, did not release their notes and refused to be interviewed as they were under no legal obligation to do so.

In his report, he said the officers' use of lethal force fell within the confines of the law.

"The evidence establishes that (the two officers) fired their weapons at the (man) in the reasonable belief that doing so was necessary to protect against a lethal threat," he wrote, explaining his decision.

"The (man) had in his possession a rifle that gave every appearance of being able to inflict grievous bodily harm or death if fired. He had been ordered to drop the weapon but did not do so. Instead, the (man) raised the weapon in the general direction of the officers, most pointedly at (Officer 2's partner), as if about to fire. On this record, it is evident that the officers shot the (man) in the genuine belief that they were about to be fired upon."

Martino added that the actions of the two officers constituted reasonable defensive force. He said the officers would not have known that the man's weapon was an air rifle.

"For all intents and purposes, the officers would have reasonably apprehended that their lives were on the line when the (man) very deliberately raised the rifle at them," he wrote.

"The man constituted a real and present danger to public safety, particularly given his proximity to a school that was in session, and the officers were not free to vacate the area. Lastly, confronted with a lethal weapon at a distance of approximately 20 to 40 metres, I am unable to fault the officers for not resorting to less lethal weapons. What was required was the (man's) immediate incapacitation, something only a firearm could do given the officers' locations," Martino concluded.

Hurricane Ian made another landfall Friday, this time in South Carolina, after carving a swath of destruction across Florida. Ian hit Florida's Gulf Coast earlier this week as a powerful Category 4 hurricane with 150 mph (240 km/h) winds Wednesday, flooding homes and leaving nearly 2.7 million people without power.

Ceremonies, marches and other gatherings are taking place across the country Friday as communities mark the National Day of Truth and Reconciliation. The federal statutory holiday was established last year to remember children who died while being forced to attend residential schools, as well as those who survived, and the families and communities still affected by lasting trauma.

Newly appointed president of the Canadian Medical Association, Dr. Alika Lafontaine shares what the organization plans to do in helping save the country’s collapsing health-care system.

He thought of the perfect place to propose. Hurricane Ian threatened his plans

A Florida man who had a feeling that the site of his first date would soon be flooded by Hurricane Ian, along Lake Eola in Orlando, rushed his partner out to the spot to ask her hand in marriage.

Canada announced today it is imposing new sanctions on Russia in retaliation for its 'unprovoked and unjustifiable' invasion of Ukraine.