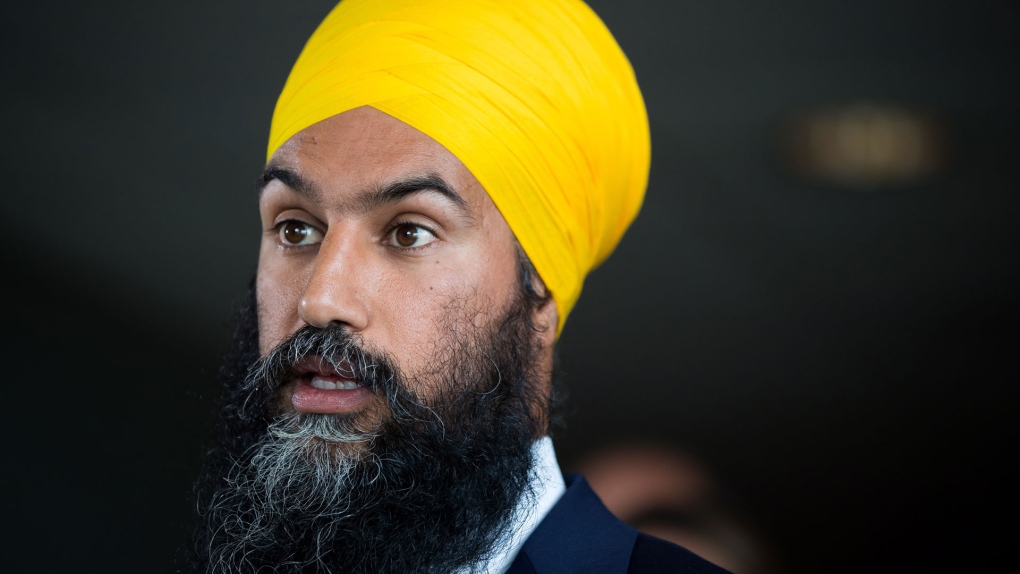 OTTAWA -- NDP Leader Jagmeet Singh learned he'll get his chance in early February to win a British Columbia seat in the House of Commons -- just as a friendlier riding on his home turf of Brampton, Ont., became available.

The surprise news dropped just as Liberal insiders were confirming that early in the new year Prime Minister Justin Trudeau will call three byelections --including in Burnaby South, where Singh has already been nominated to run -- for early February.

Brampton East could now very well be added to the roster.

Trudeau could also schedule one more byelection in B.C. for the same date. A sixth riding, due to be vacated on Jan. 22 by Montreal Liberal MP Nicola Di Iorio, is likely to remain without representation until the general election scheduled for next October.

When Singh was first chosen as NDP leader last fall, he said he'd like to run federally in Brampton East, the riding he had represented for six years in the Ontario legislature and which is now represented by his brother, Gurratan.

He initially intended to wait until the general election to seek a Commons seat but came under intense pressure to get into the House sooner after getting off to shaky start as leader. He announced in August that he would run in Burnaby South, where NDP MP Kennedy Stewart had announced his intention to resign and run for mayor of Vancouver.

Singh was nominated as the NDP candidate for Burnaby South in mid-September, for whenever the byelection comes.

Singh faces a much stiffer fight in the B.C. riding, where Stewart took just 547 more votes than the Liberal contender in 2015, than he would in his hometown of Brampton. Indeed, Liberals are privately concerned that Singh could lose the Burnaby South byelection, prompting the NDP to dump him and choose a potentially more appealing leader before next fall's general election.

After weeks of debate in Trudeau's inner circle, insiders say the prime minister has decided the Liberals will run a candidate against Singh, rather than standing aside to give him a better shot. They say the decision is based on the wishes of grassroots Liberals in B.C., who have been nearly unanimous in wanting to put up a fight in Burnaby South.

A spokesperson for Singh did not immediately respond to a question about whether the leader might consider giving up on Burnaby South and running in Brampton East instead.

Switching would not be without consequences for Singh, who has gone out of his way to assure Burnaby voters that he's not a political tourist. He's said he and his wife intend to live in the riding and that he'll run there in the general election as well.

"I am all in on Burnaby," he said in August.

But that was before the Brampton riding opened up.

Grewal said in a Facebook post that he had been struggling with the decision to resign for some time.

In a tweet, Trudeau said he learned Wednesday that Grewal "is facing serious personal challenges" and is stepping down.

"While it may have been a difficult decision, it was the right one. I hope he receives the support he needs," Trudeau wrote.

Trudeau was criticized last month when he called one byelection in the eastern Ontario riding of Leeds-Grenville-Thousand Islands and Rideau Lakes for Dec. 3, while leaving Burnaby South, the Montreal riding of Outremont and the Ontario riding of York-Simcoe vacant.

At the time, Trudeau argued that the other three had only recently been vacated, whereas Leeds-Grenville-Thousand Islands and Rideau Lakes had been without an MP for almost six months, since the death of Conservative Gordon Brown.

Insiders now say Trudeau will set a date in early February for the other three byelections. He will wait until early January to call them so candidates won't have to campaign over the Christmas holiday season.

If New Democrat MP Sheila Malcolmson resigns her British Columbia seat of Nanaimo-Ladysmith by the new year, Trudeau could call that byelection at the same time.

Malcolmson, who is making a leap to provincial politics, has announced her intention to resign once a byelection is officially called in the provincial riding of Nanaimo. The current MLA, Leonard Krog, was elected mayor of Nanaimo last month but has not yet resigned his legislature seat.

If Malcolmson doesn't quit her federal seat until later in January, Nanaimo-Ladysmith could wind up in the same boat as Di Iorio's riding of Saint-Leonard--Saint-Michel: without an MP until next fall.

Bill C-76, which the government hopes will be passed by the end of this year, would forbid the prime minister to call a byelection within nine months of the day fixed for a general election, making Jan. 20 the last day byelections could be called.