Hamilton Police Service (HPS) is advising residents who live in neighbourhoods near McMaster University there will be a significant police presence Saturday in anticipation of "unsanctioned" homecoming celebrations.

In a release issued Tuesday, HPS said residents of Ainslie Woods and Westdale neighbourhoods “can expect a significant police presence on [Oct. 1] to address an unsanctioned street gathering planned to celebrate homecoming.” 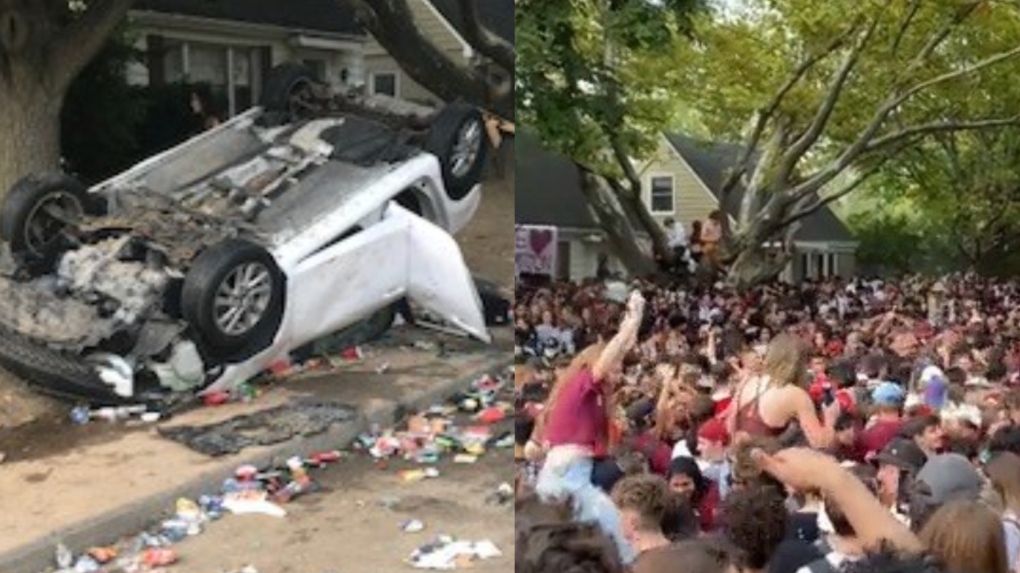 “Unsanctioned street gatherings are unsafe and result in unnecessary demands on all of our emergency services, including our hospitals,” HPS Superintendent Dave Hennick said in Tuesday’s release.

“They are disruptive to the community and pose significant safety risks to those in attendance.”

In addition to police, HPS said Hamilton Fire, Hamilton Paramedics, By-law Officers, Parking enforcement officials and Special Constables from McMaster Security have “enhanced their staffing and presence” ahead of Saturday.

This month, the City of Hamilton introduced a new Nuisance Party Bylaw, which makes it illegal to host, attend, permit, continue or refuse to leave an area, once it has been declared a nuisance.

“In addition to fines and penalties, people who conduct or host nuisance parties may be liable for remedial costs for fees from first responders, and/or, municipal law enforcement officers and City of Hamilton for attending the scene,” the release said.

Officials at McMaster have made it clear that any street events in the area are unsanctioned and have "no ties" to the institution.

"Even though there are no homecoming events [planned] at the university, Hamilton could still be the focus for some street events, which, in the past, have been organized and promoted by people with no connection to the university," the school said in a statement issued earlier this month.

"McMaster does not support these types of activities and actively works with community partners to try and dissuade students from attending street parties which can also attract large numbers of people from outside of the city. This is a challenge many cities are facing, not just Hamilton."

The last sanctioned homecoming event hosted by McMaster University was in 2019.

What the latest Bank of Canada rate hike means for inflation, consumers

The Bank of Canada hiked its key policy rate by half a percentage point to 4.25 per cent -- the highest it's been since January 2008 -- on Wednesday in its final rate decision of a year that has been marked by stubbornly high inflation and rapidly increasing interest rates.

Two organizers of the 'Freedom Convoy' won’t receive frozen donation funds to pay for their legal defence of a $300-million potential class-action lawsuit.

National Revenue Minister Diane Lebouthillier is facing calls from Conservatives to apologize for suggesting that Tuesday's auditor general report indicating that billions of dollars in COVID-19 benefits went to those who were ineligible was influenced by political pressure.

A photo of a pet dog named Bob and a couple of accidental selfies helped investigators bust an international drug trafficking ring, which saw nearly $75 million worth of drugs stopped from hitting the streets of Australia.

Polygamous leader had 20 wives, many of them minors: FBI

The leader of a small polygamous group near the Arizona-Utah border had taken at least 20 wives, most of them minors, and punished followers who did not treat him as a prophet, newly filed federal court documents allege.

Putin calls nuclear weapons a tool of deterrence in Ukraine

Russian President Vladimir Putin on Wednesday hailed the annexation of Ukrainian territories as a major achievement and said his country's nuclear weapons serve as a tool of deterrence in the war that the Kremlin calls a 'special military operation.'

There have never been so many renters in Canada, RBC report says

Royal Bank of Canada economists say the country has reached a record number of renters as the number of people renting has increased at three times the rate of homeowners in the past decade.

The Royal Canadian Mint is issuing a new $2 coin with a black ring in honour of the late Queen Elizabeth II.

Bank of Canada raises key interest rate to 4.25 per cent, its highest since 2008

The Bank of Canada has raised its overnight rate by 50 basis points to 4.25 per cent, marking its seventh rate hike in nine months. The last time the bank’s policy rate was this high was in January 2008.