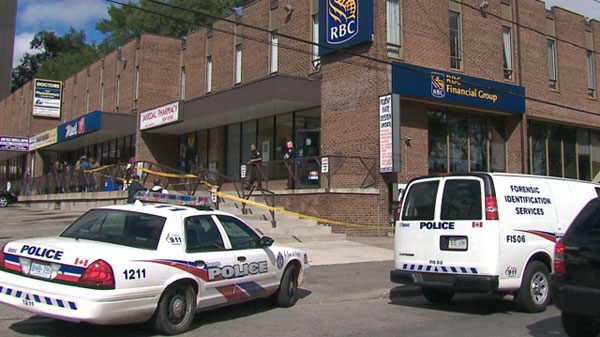 Toronto police are investigating a Friday noon-hour armed robbery in which a shot was fired inside the bank.

The incident occurred at 12:23 p.m. at an RBC branch located at 901 Jane St., which is about a half-kilometre south of Eglinton Avenue West.

Two armed suspects entered the bank. One was armed with a handgun, the other with a sawed-off shotgun. They demanded cash, he said.

There were a number of people in the bank, but Vella didn't have an exact count. No one was injured despite the gun blast.

The suspects ran to a getaway vehicle being driven by a third suspect. The suspects managed to flee with an unknown quantity of cash.

Police at the scene are interviewing witnesses and attempting to get full descriptions of the suspects, Vella said.