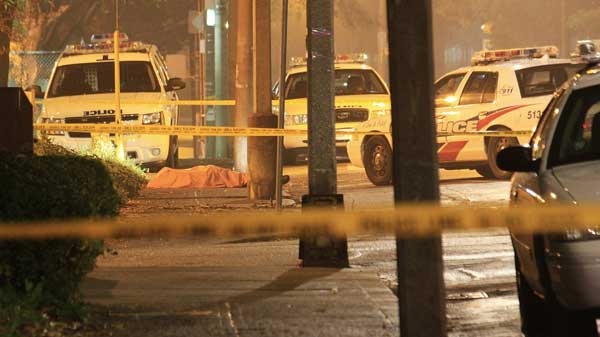 Police responded to a call about gunshots near Regent Park at 3:00 a.m. Monday morning, and discovered a male victim lying on the sidewalk. (CP24)

A man has died near in a shooting near Shuter Street and Sackville Green.

Police responded to a call about gunshots at 3 a.m. Monday morning. When they arrived at the scene they discovered a male victim lying on the sidewalk.

Const. Wendy Drummond said the unidentified victim, who was in his 20s, had an obvious gunshot wound and was pronounced dead at the scene.

Witnesses saw a man wearing a red and white sweatshirt running south on Sackville Street after the shots were fired.

No arrests have been made. Police are searching for suspects and are asking witnesses to come forward.

A post-mortem has been scheduled for Tuesday.

The shooting comes two weeks after a 15-year-old and a 19-year-old were shot and killed in Regent Park on Thanksgiving weekend.