Six people are injured in a shooting near a nightclub in St. Catharines early Sunday morning.

Niagara Regional Police said they were called downtown to the area near Karma nightclub around 2:30 a.m. after bullets were fired into a crowd.

St. Catharines Mayor Walter Sendzik condemned the shooting on Twitter, calling it a “shocking tragedy” that has shaken the city.

Breanne Ulrick, who works at a board game café across the street from the nightclub, said she heard the sounds of gunshots outside her workplace.

“It's devastating,” she said. “It makes me angry that we have … [that] kind of gun violence in our city. We've never been that kind of city.”\

Witnesses told CTV News Toronto Sunday afternoon that six to 10 shots were fired into the crowd of about 50 people. 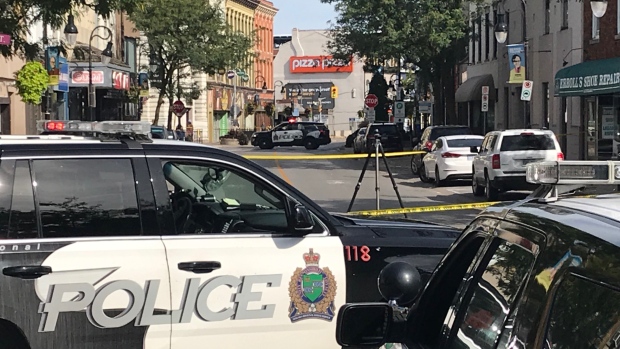 Justin Humble, who was in the area when the shooting happened, said the faces of the people trying to escape were filled with “terror” and “shock.”

Monir Mohajeri, a bartender working close to the nightclub, said a woman was banging on the window of her bar trying to get inside.

“She was like screaming, banging on the door,” she said. “One of our security guards was kind of like holding her … she was like, ‘please just let me in.’”

Detectives said they are reviewing footage and speaking to witnesses. Anyone with information is asked to contact police.

Police Chief Bryan MacCulloch said online that he was in Ottawa for the National Peace Officer's Memorial, but would head back to Niagara to provide support.

"This is a very concerning and troubling incident in our region. We have a number of detectives and resources dedicated to this investigation," he said in a tweet.