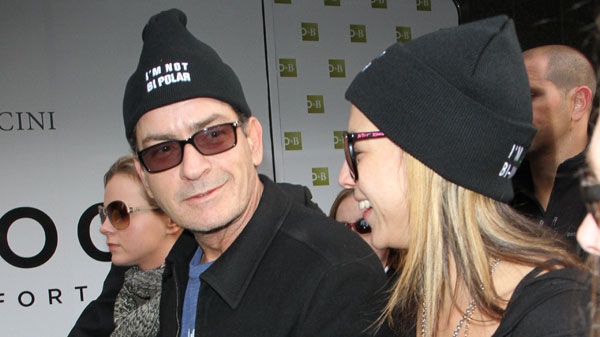 TORONTO - Charlie Sheen will deliver on a promise to donate to the Calgary-based Organization for Bipolar Affective Disorders, his business manager said Wednesday after the group expressed frustration that they hadn't heard from the actor.

"I'm his business manager, so it's Charlie's account, I'll draft a cheque, he'll sign it, I'll see him tomorrow in Atlanta and the cheque will be made and sent Federal Express, and (the organization) will have it by Friday," Barry Klarberg said Wednesday afternoon.

Klarberg's comments came after OBAD said it was "frustrated" that it hadn't heard from Sheen since the actor spontaneously organized a charity march in support of the group last Friday in Toronto.

The TV star, who was in the city on his "Violent Torpedo of Truth" tour, had vowed to match donations raised for OBAD at the walk and through the Canadahelps.org website.

But on Wednesday morning, OBAD executive director Kaj Korvela said despite repeated calls to Sheen's representatives about the matter, he hadn't heard from them.

"I'm definitely frustrated," said Korvela. "At least he could've got his people together to give me a call, to give me sort of an accounting of it, and we have no control. We were just dropped into this without any consultation."

Klarberg said he contacted Korvela on Wednesday afternoon to work out the details on how much Sheen's donation would be.

Klarberg said he was awaiting donation figures from Canadahelps.org, as well as Sheen's tour representatives, before sending off the donation.

"I'm going to get the dollar amount, we'll meet the amount that was on the (Canadahelps.org) network, dollar for dollar, we'll make that contribution," said Klarberg, adding that Sheen would also give the group money from memorabilia he sold during the walk.

Wednesday evening, Korvela said that he and Klarberg agreed via email that Sheen would donate C$5,600 to OBAD.

Sheen may also organize another charity event for OBAD when he takes his tour to Vancouver on May 2, said Klarberg.

"We did speak about possibly doing something different in Vancouver when Charlie's there ... something where moneys can be raised," he said.

"I think it's a good choice for a charity, it's a good organization, and it's a very positive message and we want it to be something positive from Charlie's camp to raise money for a cause."

Sheen has a history of drug and alcohol problems. When told in a recent interview with ABC News that some people feel he might have bipolar disorder, Sheen said he's not bipolar but "bi-winning."

Korvela said while he was happy that Friday's walk brought about awareness to bipolar disorder, he also felt that some aspects of the walk weren't "very complimentary to people with mental illnesses."

"Just by the fact that he's doing a walk and he's (wearing) a hat that says: 'I'm not bipolar,' well that sends sort of a negative image, like that somehow he is above people who have mental health concerns," he said.

"One in four people in Canada and the U.S. are affected by a mental health issue in any given time of the year, and that includes depression, bipolar disorders and mood disorders in general."

Klarberg said he didn't want Sheen's fundraising efforts to be seen as "something negative."

"It's a very positive thing, it's a very sensitive issue for a lot of people with this and we want this thing to be a positive," he said.

"This money's being raised for a good cause and that's really what we want here."