'She the North' rally for Bianca Andreescu takes over Mississauga

A little rain could not keep people from gathering in Mississauga on Sunday to celebrate hometown hero and U.S. Open champion Bianca Andreescu.

Occasionally breaking out into “She the North” chants, tens of thousands of people from across the GTA attended the rally at Celebration Square.

“This is crazy,” Andreescu said as she looked out onto the packed crowd. "I never thought I would have my own parade.” 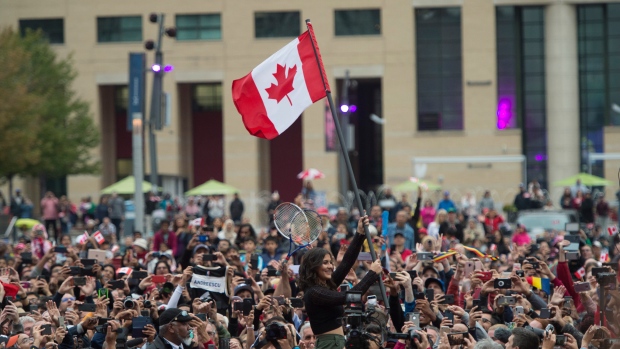 Tennis star and US Open winner Bianca Andreescu holds up a Canadian flag at a rally for her in Mississauga, Ont., Sunday, Sept.15, 2019. THE CANADIAN PRESS/Sean Kilpatrick

The 19-year-old became the first ever Canadian Grand Slam singles champion with her win over tennis legend Serena Williams on Saturday, Sept. 7 at the U.S. Open.

Several notable names joined in on the celebrations for the Mississauga teen including federal Liberal Leader Justin Trudeau.

“How about that Bianca Andreescu,” Trudeau asked, to the crowd of screaming fans.

“She is an inspiration to all Canadians old and young,” he said. “But to be honest, especially to young Canadians because she showed that young people can do anything.” 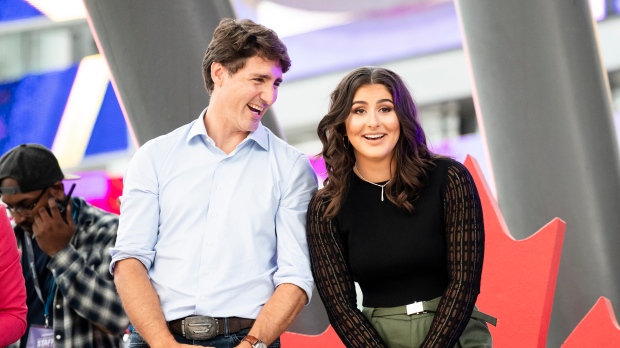 Liberal Leader Justin Trudeau is seen on stage with Bianca Andreescu as she takes part in the SheTheNorth rally after winning the US Open, in Mississauga, Ont., on Sunday, Sept. 15, 2019. THE CANADIAN PRESS/Christopher Katsarov

Toronto Mayor John Tory was also in attendance and marked the occasion by proclaiming Sept, 16 ‘Bianca Andreescu Day’ in Toronto.

And the honours kept coming as Mississauga Mayor Bonnie Crombie took the stage.

“Bianca you are our hometown girl, but you are Canada’s champion and we are so proud of you,” Crombie said, before handing Andreescu the key to the city.

Andreescu, who trained at Mississauga's Ontario Racquet Club, was then presented with her own street sign, though the street’s location has not been confirmed.

“We are honored to be hosting today to celebrate your incredible achievement,” Crombie added. 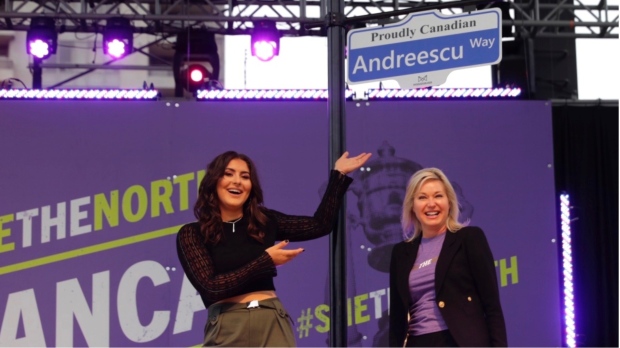 The newly minted U.S. Open champion has been busy since she took the title.

She received congratulatory messages from Shania Twain, Steve Nash and the Prime Minister. Even Drake sent Andreescu a message, but not until after she called him out on live TV for not doing so.

The Toronto rapper doubled down on the congratulations today, gifting the tennis star with a care package filled with gear from his clothing brand October’s Very Own (OVO), which she received at the rally.

At a press conference Wednesday, Andreescu said she was excited to be a role model for young Canadians and the Chair of Tennis Canada confirmed that aspiring tennis players are already picking up their rackets.

“Since Bianca’s win, we have been inundated with inquiries across the country all wanting to know more about how and where they can start playing tennis,” Jennifer Bishop said.

“What’s happening in Canadian sport this year has been so beautiful to watch and was so inspiring,” Andreescu said as she addressed the crowd a final time.

“I am truly, truly blessed. I love you!”