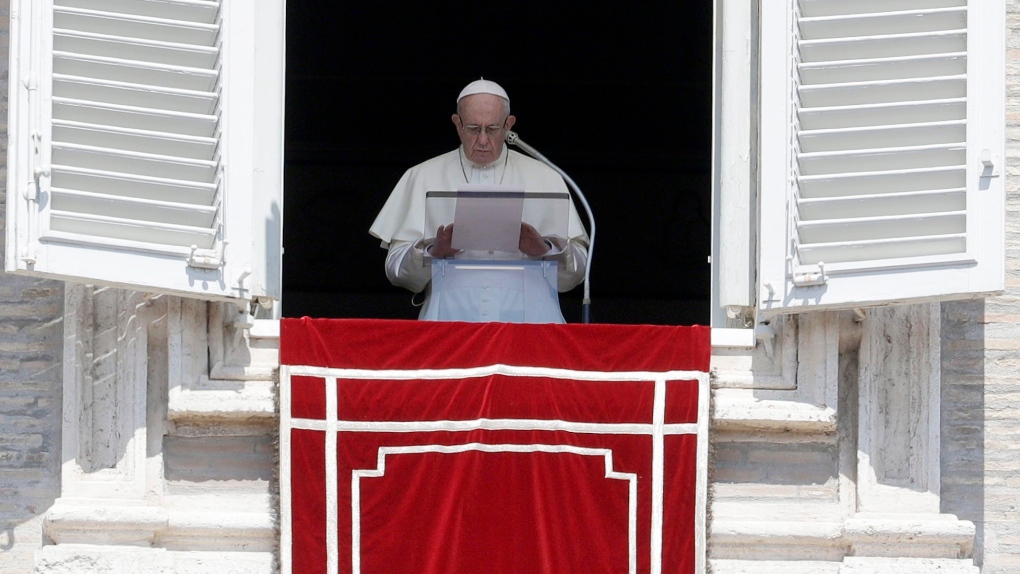 In this Sunday, Aug. 19, 2018 file photo, Pope Francis prays for the victims of the Kerala floods during the Angelus noon prayer in St.Peter's Square, at the Vatican. (AP Photo/Gregorio Borgia, File)

TORONTO -- Several priests accused in an American grand jury report of preying on children for years were treated or assessed at a facility north of Toronto that specializes in services for members of the clergy, the recently released document reveals.

The report, which said it found more than 1,000 children were molested or raped by over 300 so-called "predator priests" in six Pennsylvania Roman Catholic dioceses since the 1940s, also indicated a few allegedly committed assaults while on trips to Canada.

The document released last week said a succession of bishops and other diocesan leaders shuffled abusive priests around parishes rather than reporting them to police in an effort to shield the church from bad publicity and financial liability.

At least seven priests named in the report were sent at some point to what was previously called the Southdown Treatment Centre, or Southdown Institute, located in Aurora, Ont., the document said.

"Southdown is an inpatient residential treatment facility that specializes in treating men and women in ministry," said the report.

The facility, now called Southdown, has since moved to Holland Landing, Ont. It provides 14-week inpatient mental health treatment to clergy and people otherwise involved in the church, according to its website. It also offers a continuing care program for those who've received inpatient treatment, as well as outpatient psychological services and "comprehensive clinical and candidate assessments."

A spokeswoman for Southdown declined to respond to questions.

Among those who received inpatient treatment at Southdown was Rev. John S. Hoehl, who worked in several Catholic schools between 1964 and 1988, when he was stripped of his priestly duties.

He was treated at the facility for about six months starting in May 1986, the report said.

"During his treatment at Southdown, the director informed the diocese that Hoehl had admitted that he had been sexually involved with several high school students when he was headmaster at Quigley," it said. "At the conclusion of his treatment, Southdown provided the diocese with an assessment that Hoehl, in fact, was/is a pedophile."

Shortly thereafter, the report said, Hoehl was given a job as an educational consultant.

Another priest who went to Southdown was Rev. John P. Connor, who was arrested in 1984 on charges that he sexually abused a 14-year-old in his home while working as a theology teacher and golf coach at a prep school, the report said.

The case never went to trial after the diocese intervened and negotiated an agreement in which he admitted to the abuse and would "have the record of his arrest erased, as long as he were not re-arrested within one year," the report said.

"The documents from Southdown indicated an assessment that because of Connor's problem with alcohol: 'he acts out sexually with some preference to late adolescent males,"' the report said. "They specifically warned against giving Connor responsibility for adolescents such as a teaching situation."

Less than a year later, he was given "unrestricted ministry" at a new church, the report said.

"There was no warning to the parishioners of the church that he was an admitted child molester," it said.

Michael G. Barletta, who admitted to abusing more than 25 children and young men between 1975 and 1994, also went to Southdown, the report said, adding he was treated for parts of 1994 and 1995, though the diocese listed him as being on sabbatical.

"After 1994, there are reports and documents that proved that Barletta was allowed to continue ministering to the faithful in the Diocese of Erie," the report said.

The grand jury report also said two unnamed teens were on a retreat with Barletta in Toronto when he allegedly sexually abused them in a hotel room. It noted that he has denied any sexual misconduct with the pair, but admitted to vacationing with them in Canada.

Another priest -- Rev. Robert Wolk -- who ultimately pleaded guilty to four counts of "involuntary deviate sexual intercourse" and to corruption of minors was also investigated for incidents that allegedly occurred in Canada, the report said.

Yet another priest accused of sexual abuse, Rev. Theodore P. Zabowski, allegedly slept in the same bed and served alcohol to a minor while on a trip to Canada, the document added.

According to the most recent annual report posted on Southdown's website, just over half of the 50 people treated at the facility in the 2016-2017 fiscal year were diagnosed as having mood disorders, and six per cent were diagnosed with a sexual disorder. It said mood disorders include schizophrenia, depression and anxiety, but did not include a definition for sexual disorders.

The annual report said most residents presented with more than one diagnosis.

A spokesman for the Archdiocese of Toronto said it sends priests to the facility periodically "to deal with a variety of issues for example depression, alcohol or other similar situations, as well as psychological assessments if needed."