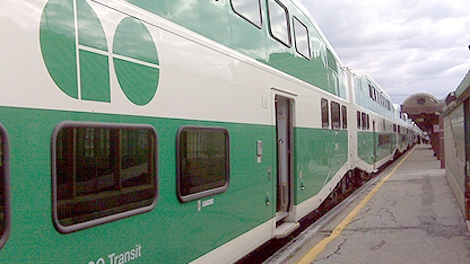 TORONTO -- A freight train derailment west of Toronto is causing disruptions for commuter trains into the city this morning.

It says a train scheduled to leave from West Harbour station in Hamilton has been cancelled, while passengers trying to catch a train from Aldershot or Appleby stations in Burlington, Ont., will now have to get on at the Burlington or Oakville stations.

The freight train unfortunately has two coaches derailed which is preventing us from travelling into Aldershot. Stay tuned for more info https://t.co/Zdojq1cSrv

A spokeswoman for Metrolinx, the agency that operates GO Transit, says the freight train derailment is preventing travel into Aldershot station.

Anne Marie Aikins says in a tweet that two of the train's cars derailed.

No other details about the derailment were immediately released.