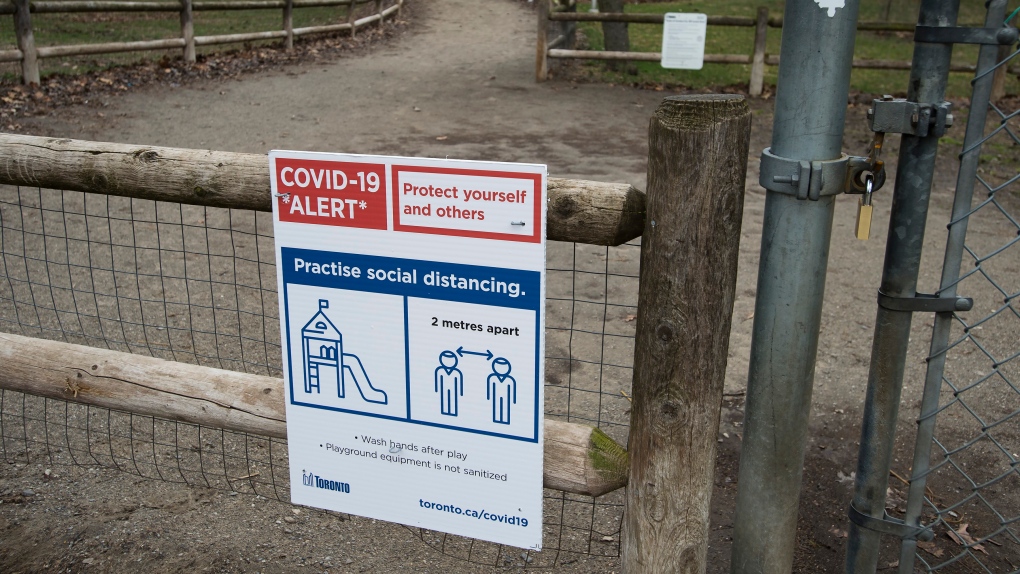 The High Park off leash dog park is closed in Toronto on Tuesday, March 31, 2020. Ontario has closed recreation areas due to the coronavirus also known as COVID-19. THE CANADIAN PRESS/Nathan Denette

TORONTO -- Mayor John Tory is urging “everyone who can stay home” to do so over the Easter weekend.

“I know it is a more difficult time to stay home historically in terms of people’s habits,” Tory said during his daily news conference at city hall on Thursday. “It’s hard to be away from friends and families and it is hard not to gather to celebrate, but it is what needs to be done in order to save lives.”

Tory thanked the “vast majority of people” who have stayed at home in recent weeks to slow the spread of COVID-19 but noted that there are some who still do not seem to want to follow the rules and continue to flout social distancing recommendations and use shuttered facilities within the city parks.

Playgrounds, off-leash dog areas, sports fields and courts, and parking lots at the city’s more than 1,500 parks are just some of the amenities that have been closed to support social distancing measures.

A new bylaw is also in effect ordering people who do not reside together to stay at least two metres apart in all parks and public squares.

The mayor said on Wednesday, enforcement officers spoke to about 1,000 people to remind them of the bylaws that are now in place.

“Unfortunately we do continue to see some people participating in prohibited activities in our parks, including Sunnybrook and Sherwood parks, where there were dogs off-leash and people were gathering in groups to socialize, which is not a part of the social distancing,” Tory said.

He said there were also reports of large groups gathering at Humber Bay East and High Park as well as Riverdale Park, where people were spotted using the dog park and baseball diamond.

“I don’t speak about not using these things because we are trying to be hard-hearted or spoil your holiday weekend. We are doing it, again, for your health and wellbeing and the safety of the people in the city of Toronto,” Tory said.

“You don’t know when you are in those places that somebody, including yourself, might be carrying the virus.”

Toronto police say they will be conducting an enforcement blitz over the long weekend, targeting parks across the city.

Parking enforcement officers will also be patrolling “hotspots” for people who park in closed lots.

Tory said owners of short-term rental properties are now among the latest residents in the city who could face a hefty fine if they do not respect provincial orders.

New regulations from the province stipulate that short-term rentals can only be provided to individuals in need of housing during the emergency period in order to preserve supply for people who need to book a unit for the purposes of isolation or quarantine.

Tourism and recreational stays are no longer permitted.

“The City is working with short-term rental platforms to make sure they comply with these new regulations,” Tory said Thursday. “Letters were sent to them yesterday to notify them of this change during the emergency period.”

Those who do not comply with the order could face a fine ranging from $750 to $100,000 and up to one year in jail under the Emergency Management Act.

Complaints about short-term rental violations can be made to 311, the mayor said, adding that “a party or event” at an Airbnb unit is not considered an emergency.

“City licensing officers, as part of their work to enforce the provincial order on essential businesses, will respond to any complaints about a short-term rental that is not being used to house individuals in need of housing during the emergency period,” Tory said.