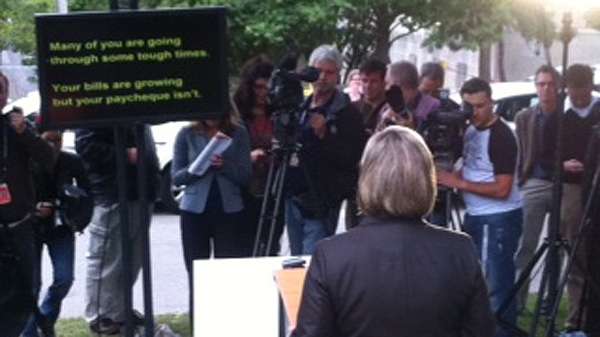 The writ to launch the formal Ontario election campaign was issued Wednesday morning.

For those of us who have been paying attention for the past weeks today will sound very familiar. It's not a day for announcements and new policy. Instead it's a day when each party works overtime to provide the top sound bite, the best picture and get the headline it needs to kick-start the campaign.

All the campaigns know that they are guaranteed coverage. So it is all about taking advantage of that opportunity to make an impression.

As Liberal Leader Dalton McGuinty - got the early advantage with his visit to the Lieutenant Governor. He's the one who walks down the steps of the Legislature with his wife reminding everyone he's the one to beat.

And now it's up to the campaigns to orchestrate the day to get the best advantage.

The Liberals will drive up to Mississauga for a rally in the noon hour. The eight ridings in the Peel region will be one key to winning the election. If the Liberals hold them it will be very difficult for the Progressive Conservatives to win.

While the Progressive Conservative campaign told me it would spend a lot of time in the west side of the GTA Wednesday morning's first event was in the riding of Willowdale in north Toronto. It's a riding held by the Liberal's David Zimmer since 2003. Zimmer won in 2007 by 6,000 votes.

The photo op for PC leader Tim Hudak was a kitchen table chat with a couple about the economic pressures the family is under. The Conservative candidate this time is Vince Agovino.

Agovino told me that voters in his riding "want change." Agovino stuck to the party message saying voters in Willowdale are tired of being "nickel and dimed on taxes."

The Conservative bus is headed along the 401 and ends up in Ottawa with a rally this evening.

NDP leader Andrea Horwath began the day on the lawn at Queen's Park. Horwath has the greatest opportunity and the greatest risk in the campaign. The CTV/CP24 poll this week revealed that 55% of Ontarians really have not formed an opinion of Horwath. Her early advantage is that those few with a formed opinion tend to be quite positive.

So there she was on the lawn talking to reporters and the campaign set up lights and a teleprompter to show off the NDP leader.

Usually teleprompters are used at big events but for Horwath the next four weeks will be about policy and image – and maybe not in that order. So the prompter was rolled in to make her television performance as seamless as possible. We'll see if it earns her the "sound bite of the day."

Horwath headed straight to York South, one of the ridings that the NDP feel they have a strong chance to win. Back in February 2007 the NDP's Paul Ferreira won by 300 votes in a by-election. Then in the provincial election that fall Liberal Laura Albanese won by 500 votes. It's going to be a riding to watch on election night when Ferreira and Albanese go at it one more time.

Horwath will end her day in her hometown, Hamilton. She'll be in the riding of Hamilton Mountain. It's another Liberal held riding. The Liberals won that one in 2007 by abut 2,000 votes.

You might be curious how many journalists are riding with the leaders on those big painted buses. Today there are 12 signed up to ride with the Liberals in the GTA, ten along for the ride to Hamilton with Horwath and nine heading to Ottawa with Hudak.