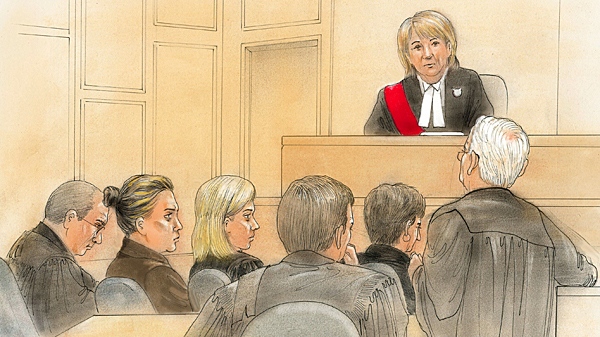 Justice Nola Garton listens to arguments on Thursday, Nov. 25, 2010 about how to proceed in the Erika Mendieta murder trial.

TORONTO - A Crown lawyer whose behaviour so distracted jurors that the judge is prepared to declare a mistrial is a dedicated public servant who simply "got caught up in being a human being," a Toronto court heard Thursday.

"Honourable members of the bar are being maligned by an overzealous press," said Armstrong, who had not previously appeared in court to argue the case.

"To malign people like this in the media is unacceptable."

The trial was knocked off the rails last week when the jury asked the judge to remove a blond man sitting in the front row for making what they called "strange faces."

The jury's note even included a diagram that identified where he was sitting.

"We find him very distracting and he is making strange faces all the time," the jury wrote. "We feel very uncomfortable with him."

The man turned out to be Alexander, a Crown who wasn't involved in the current trial but had previously prosecuted Erika Mendieta on charges of killing her two-year-old daughter Emmily. That trial ended in a hung jury.

Justice Nola Garton dismissed the jury Monday and was prepared to declare a mistrial.

Both the defence and prosecution say they want to salvage the case by proceeding with just a judge, which also requires Garton's consent.

But they couldn't agree on the terms Thursday and are due back in court next Tuesday.

As both sides made their arguments in court, Armstrong suddenly launched into a passionate defence of his Crown colleagues and what he perceived to be a public attack on their professional reputations.

He accused the media of "harassing" families, taking pictures of his colleagues and showing up at their homes.

Say what you will about Alexander, even call him a "doofus" as some have already done, Armstrong said.

"He was a dedicated public servant who got caught up in being a human being," he added.

Armstrong denied that MacPherson looked at Alexander when he was in the courtroom, calling her one of the "most honourable" people he knows.

It's been reported that MacPherson looked back several times at Alexander throughout her cross-examination of Mendieta and spoke to him during breaks.

There have been calls for an independent probe into whether MacPherson and fellow prosecutor Daniel De Santis should or could have prevented the trial for being derailed.

Under Opposition fire in the legislature, Attorney General Chris Bentley acknowledged that Alexander is no longer on active court duty.

Bentley, who practised criminal and labour law, has said he's never seen anything like this in his 30 years as a lawyer.

James Morton, a seasoned lawyer and past president of the Ontario Bar Association, said it's actually very common for a Crown to show up at a re-trial to see how things turn out.

"I don't see there's any problem with it at all," he said.

But there are very clear rules of deportment for lawyers, which apply even when they're off duty, he said.

Some observers can get emotional in court, but it's "clearly improper" for any member of the bar to try to show their distaste or disagreement with evidence, he said.

"Before pouring gasoline on him and putting him on a bonfire and lighting him, I think we need to see what other people say and know what really happened," he said.