TORONTO -- With his 100th birthday approaching, you could forgive Marvin Gord if he wanted to slow down a little. But that’s just not his style.

Gord is walking with a purpose these days, with the goal of taking one million steps before his birthday on New Year’s Eve. The North York resident and Second World War veteran hopes to raise $1 million for Baycrest Foundation, a charity that provides medical equipment and treatment for senior citizens.

“I’m over 500,000 steps already and I do about 20km of walking a week,” Gord told CTV News Toronto from Ripley’s Aquarium on Tuesday, where he was getting his daily workout.

The fundraiser was inspired by British war veteran Tom Moore, who raised more than $40 million for charity by completing 100 laps around his garden before his 100th birthday

“I’ve received some medical help from Baycrest. They’re one of the top geriatric research facilities in the world,” said Gord. “And my mother was a Baycrest volunteer in every department, in her 60’s, 70’s and 80’s. That’s what got me started.” 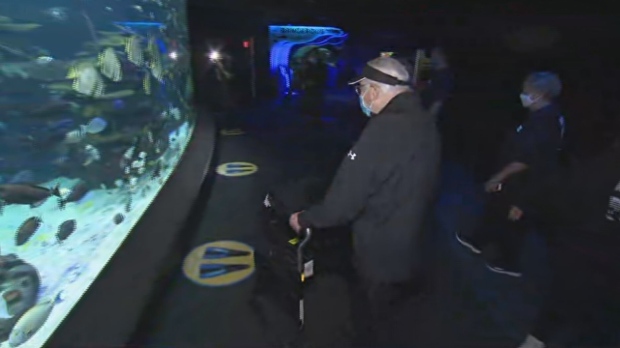 The dogged determination he’s applying to his charitable endeavor is emblematic of Gord’s career. He enlisted to serve in the Second World War with the goal of working as part of an aircraft crew. He was initially rejected because he wears glasses, which couldn’t be easily replaced in that era. Undeterred, he pivoted to become a radar specialist, with tours of duty in England, Italy and Africa. His post-military career is no less prolific. Gord would go on to earn university degrees in pharmacology, psychology, finance and law, before becoming a professor at Centennial College.

“I was the only professor who could teach in four different departments,” Gord said with a chuckle before adding the kind of advice that only comes with a century of experience; “get an education, and never stop.”

“Marvin is a remarkable man,” said Rafi Yablonsky, a manager with Baycrest Foundation. “Rain or shine there’s nothing that stops him from getting his steps. You just can’t stop him.”

Though he now uses a walker for assistance, Gord says it was at his doctor’s insistence.

“I get tested every year for fitness at the Toronto Rehabilitation Centre. Last year, they asked me why I lied to them. They thought I was 20 years younger.”

“My children and my grandchildren, his great grandchildren will see how their grandfather gave back to the community,” said Lisa Hemi, Marvin’s daughter. “They’ll become upstanding citizens by following his example.”

“I just happen to be really lucky” said Gord. “I’m able to do it with a special food I have every day called Johnny Walker black.”