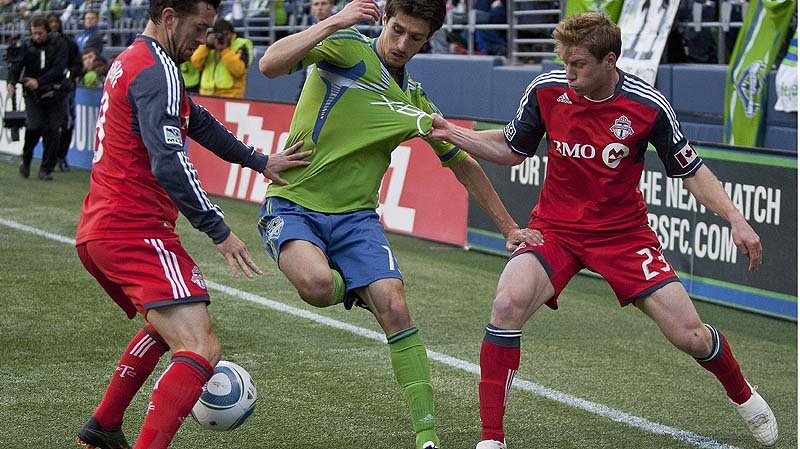 SEATTLE - Brad Evans scored twice in the second half and set up Alvaro Fernandez's first-half goal in the Seattle Sounders' 3-0 victory over Toronto FC on Saturday night.

"I thought for the team overall, this was just a good push going forward," said Evans, whose multiple-goal game was the first of his career. "We played players in different formations and different positions as well, so I think everybody had a good attitude from that standpoint."

Evans was one of those players, moving to the right side, and with spectacular results.

"Brad has played on the right before, and he's comfortable out there," Sounders coach Sigi Schmid said. "He has a good cross with the ball, as he showed on the first goal, then obviously, he finished his goal. He was unlucky not to get a couple more."

Fernandez, who started for the first time since March 19, scored his second goal of the season. James Riley sent a long through ball to Evans down the right side, and Evans floated it across the penalty area. Fernandez headed it into the right corner.

On a quick counterattack in the 52nd minute, Evans took a through ball from Fredy Montero down the right side, took it just inside the box and sent a shot off of goalkeeper Stefan Frei's hands into the left corner.

"I thought we were a little unfortunate to only be ahead by one at halftime," Schmid said. "We said the first 15 or 20 minutes of the second half would be important. We got that second goal early in the second half, so that helped us establish our rhythm.

Evans converted a penalty kick on a handball call in the 75th minute, giving him three goals this season.

The match was Seattle's first since starting midfielder Steve Zakuani's right leg was broken on a hard tackle by Colorado's Brad Mullan on April 22. Zakuani is likely out for the season, and Mullan received a 10-game suspension Thursday.

The Sounders also were without forward O'Brian White, who had surgery on his left leg Wednesday to remove a blood clot, and is out indefinitely. White and Zakuani had accounted for four of Seattle's previous seven goals.

"We talked about before the game of kind of doing it for them, so I think that was in the back of everybody's mind," Evans said.

The Sounders dominated the match, outshooting Toronto by a 19-6 margin. Frei kept it from being more lopsided by making seven saves.

"It is very simple: It was a bad game and we didn't play well," Toronto coach Aron Winter said. "Seattle played the way we expected them to play, but during the game, everyone (on our side) was afraid. Secondly, (our players) were doing something - just not the things we asked.

"When most of the players are doing their own thing, it will be difficult."

"We didn't show up today -- simple as that," Peterson said. "They did everything they wanted to do, and we were running around chasing ghosts out there."

The Sounders have scored 10 goals since going scoreless in their 0-2-0 start.