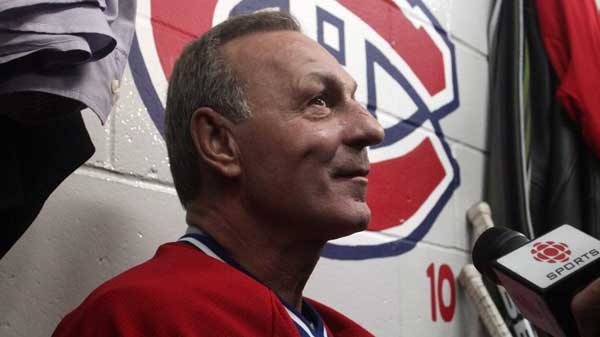 Guy Lafleur, Montreal Canadians retired NHL hockey star, takes a break in the dressing between period as he plays his last game of old timers hockey in his hometown of Thurso, Quebec, Sunday December 12, 2010. (Fred Chartrand / THE CANADIAN PRESS)

TORONTO - The NHL Alumni are teaming up with a Toronto neuroscience institute on a study to track the brain health of retired players.

The Rotman Research Institute at Baycrest is recruiting former NHLers to participate in the study.

The aim is to identify risk factors linked to cognitive decline and mental health changes as the players age.

They will also undergo MRI scans at Baycrest, and blood and fluid samples will be collected to look at genetic factors and other biomarkers linked to dementia.

The former players will have followup cognitive testing and structural brain scanning with MRI every three years.

"As former players from a high-impact sport, we are very interested in contributing to research that will help illuminate the different factors that influence the aging process, particularly around brain health and the development of dementia," NHL Alumni executive director Mark Napier said Wednesday in a statement. "We are hoping that the findings from this study will have wider implications for all aging adults."

Family members and friends of the players will be recruited to form a comparison group that will have the same assessment procedure. This comparison group is crucial to isolate brain health factors that may be specific to the NHL alumni, as opposed to those present in the general population.

"In head injury, teasing apart the contribution of genetics and other health factors to aging and brain function is a great challenge," said principal investigator Dr. Brian Levine, a senior scientist with Baycrest's Rotman Research Institute and an expert in head trauma and dementia.

"By comprehensively assessing both the players and matched comparison subjects, we hope to better understand this process," Levine said. "This study will help us to understand the aging brain not only in professional athletes, but in the population at large."

A portion of the proceeds from next week's sixth annual Scotiabank Pro-Am Hockey Tournament, in support of the Gordie and Colleen Howe Fund for Alzheimer's at Baycrest, will help to fund the study.

The announcement of the study follows the largest and most detailed analysis of concussions in the NHL, which was recently published in the Canadian Medical Association Journal.

The analysis, which looked at seven regular seasons from 1997 to 2004, found a total of 559 concussions during regular-season games, working out to a concussion rate of 5.8 for every 100 players, or an estimated 1.8 concussions per 1,000 player-hours.

In March, league commissioner Gary Bettman announced new concussion protocols that involve players who display symptoms being given a test by a doctor in a quiet location before returning to the ice, rather than trainers doing an exam on the bench during a game.