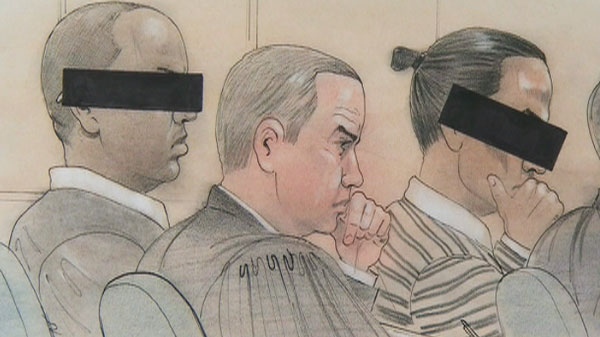 Two men, who can only be identified as J.W. and C.D. under the Youth Criminal Justice Act because they were 17 when Manners was shot, appear in a Toronto courtroom on Monday, March 21, 2011.

TORONTO - Teachers and staff who were working at a Toronto school on May 23, 2007, gave their accounts Wednesday on the moments leading up to and after the discovery of a collapsed Jordan Manners.

Manners, 15, was shot in the chest that day with a small .25-calibre bullet and was found lying in a stairwell at C.W. Jefferys Collegiate Institute.

Two men, who can only be identified as C.D. and J.W. because they were youths at the time, have pleaded not guilty to first-degree murder.

Art teacher Eric Colquhoun told the court he was the first staff member to arrive at the scene and saw two girls standing over a fallen Manners, who was lying face down.

School staff were forced to cut off Manners' jacket and shirts because, Colquhoun said, the zipper on the boy's jacket was "melted," and wouldn't budge.

He described Manners' breathing as laboured as a secretary cradled the boy's head as they waited for paramedics to arrive.

Colquhoun said he saw J.W. there and the teen was shielding his eyes as staff cut off Manners' jacket and exposed his torso.

Manners was "gasping," secretary Stephanie Frasca testified as she detailed the effort to figure out what had caused Manners to collapse.

Frasca said she held Manners' head and watched his breathing worsen after staff followed the directions of a 911 dispatcher and turned him onto his back.

The bloodless bullet hole in Manners' chest as "a little circle ... it looked like an old scar," Frasca said.

Frasca also testified she saw J.W. at the scene, describing him as panicking, and telling teachers he was trying to call Manners' mother.