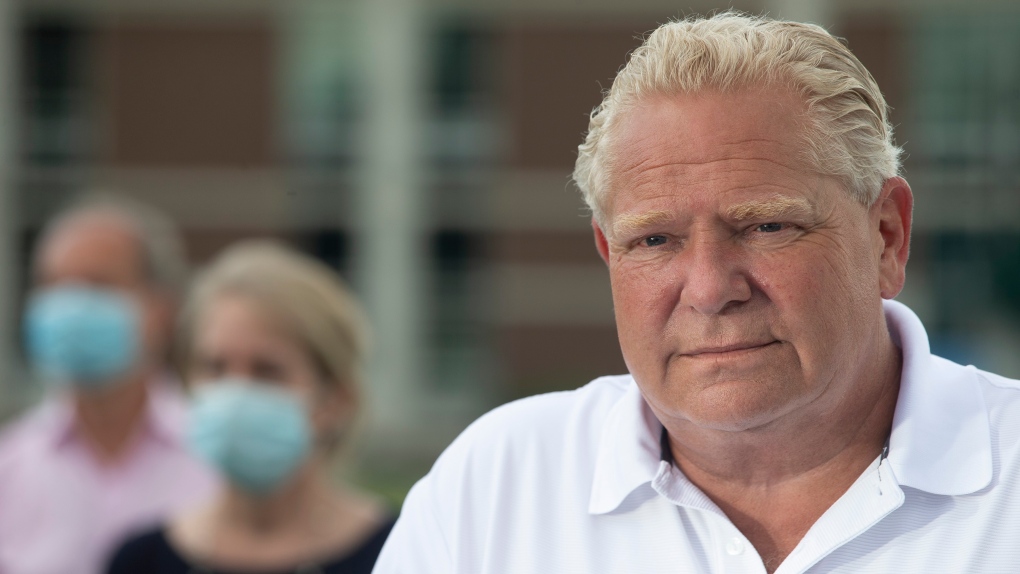 Ontario Premier Doug Ford takes a question from the media during an announcement in Ajax, Ont., on Tuesday, July 28, 2020. THE CANADIAN PRESS/Chris Young

TORONTO -- School boards need to pick up the pace of air quality improvements as schools reopen this fall, Ontario Premier Doug Ford said Friday, urging them not to move "on government time" as they rush to spend millions in funding allocated earlier this week.

Ford's remarks came just days after the province told school boards they should spend $50 million by Thanksgiving to upgrade air quality in schools in an effort to bolster COVID-19 safety measures.

But Ford said Friday that the money is there, boards need to move now as students return to the classroom in weeks.

"Everything is immediate nowadays with this pandemic," Ford said. "We can't wait, we can't go on government time and dawdle along. We've got to go on lightning speed and get it done."

Ford said the work would be approached differently in the private sector.

"If someone had a warehouse or something and had to put HVAC in it, it would get done in a few weeks," he said. "So why can't we do that in schools?"

The province announced the $50 million in funding for ventilation upgrades earlier this month. A memo from the Ministry of Education on Tuesday asked boards to "expedite" upgrades so they can be completed before the start of school.

"The ministry appreciates that some of the initiatives may require additional time, but we ask that every effort is made to bring the benefits of these investment online by Thanksgiving," deputy minister of education Nancy Naylor said in the memo.

The president of the Ontario Public School Boards' Association said boards will do their best to complete the work quickly, but finishing it up by Thanksgiving will be difficult.

"The challenge is going to be making the plan to get the work done, and then finding people to do the work in 48 days," Cathy Abraham said. "It might sound like a long way off, but really it's a month and a half and there is so much else going on."

NDP education critic Marit Stiles said Ford's comments suggest he doesn't understand that boards will need to subject some of the projects to competitive bidding to ensure taxpayers get value for their money. School construction can't be treated like warehouse repairs, she added.

"Many of our schools are over 100 years old. There is asbestos in a lot of those buildings. You can't walk in and just start busting walls open," said Stiles. "This has serious consequences for our children and there is nowhere to move in our packed schools. The buck stops with the premier."

The co-founder of the advocacy group Fix Our Schools said the province knew months ago that air quality issues would need to addressed, and it should have allocated the funding sooner.

"On the ground, principals, teachers, school boards, education workers will actually make this a safe environment, but it will be a herculean effort," Krista Wylie said. "It will be underfunded, and it will be a small miracle that it all comes together."

Wylie said the guidelines also fail to take into account the poor condition many older schools are in, making the standards difficult for many boards to achieve.

Colin Furness, an infection control epidemiologist at the University of Toronto, said smaller boards with fewer schools might be better positioned to act quickly and remediate air quality.

"Larger boards will have challenges in simply completing a survey of needs, let alone going to tender and getting hundreds of schools ameliorated," he said.

Furness said schools will need to survey individual classrooms, not just schools, to determine their needs.

"Some have windows that open ... but some have no windows at all," he said. "So even within the same school there could be varying needs, and I'd be concerned that the available supply of parts and equipment -- like portable air scrubbers -- might not be adequate."