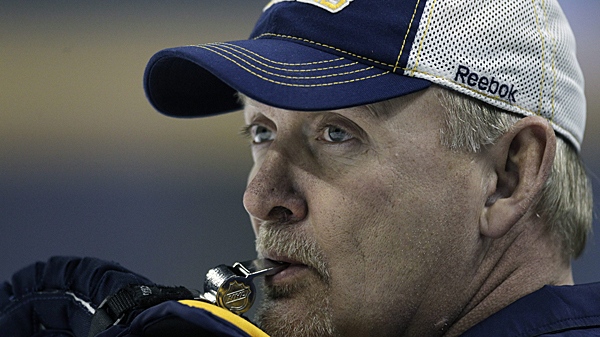 Ruff sustained three broken ribs in what was described as "a freak accident" after he was upended by defenceman Jordan Leopold in practice on Monday. In revealing the extent of the coach's injuries, the Sabres announced that Ruff is expected to be back at practice Tuesday to "resume his coaching responsibilities."

Ruff was hurt near the end of practice during a puck-chase drill when Leopold was trying to cut off forward Ville Leino. Ruff was standing in the middle of the ice looking the other way when Leopold lost his footing and went sliding head first on his stomach and crashed into the back of his coach's skates.

Ruff fell backward and landed on his right side with a heavy thud, and was fortunate not to hit his head. Witnesses said they heard Ruff yell out in pain.

A Sabres trainer went out to tend to Ruff, who required assistance as he slowly skated off the ice. Ruff was still in pain, clutching his right arm, as a trainer escorted him out of team's facility a few minutes later.

"I was racing for the puck with Ville, and I ended up losing an edge," Leopold said. "Right when I hit the deck I knew there was no way I was getting up. I was yelling, 'Heads, heads, heads.' Lindy had his back to me, and it ended up happening."

"I lost my breath. I was looking back right when it happened and I yelled, 'Are you all right?' And right away, 'No.' So that wasn't a good thing," he said. "That was one of those unexpected ones. Those ones are dangerous."

Ruff's injury is the latest to hit a team that's been banged-up for much of this season. Captain Jason Pominville is the only player not to have missed a game this year.

Sabres owner Terry Pegula has blamed the rash of injuries on much of his team's struggles this season. Buffalo (22-24-6) opened Monday in a tie for 12th in the Eastern Conference standings.

The Sabres are 3-0-1 in their past four games since snapping a five-game skid, and host Boston on Wednesday.

In his 14th season with the Sabres, the 51-year-old Ruff is the team's winningest and longest-serving coach.

"Scary situation, just hoping he's going to be all right here," goalie Ryan Miller said. "Lindy's broken a few bones and had a few scrapes and a few cuts in his career. To see him in that much pain, I think he probably has something going on there. And hopefully he's all right. We need him behind the bench yelling and calling the lines."