Canadian actor Ryan Reynolds is letting his ugly sweater do the talking during this year’s holiday campaign for The Hospital for Sick Children in Toronto.

For the fourth year in a row, the Vancouver-born star is using an “aesthetically challenged” sweater to raise money for the SickKids Foundation.

But this year the actor says little in his campaign video, which has been posted and shared widely on social media.

The video begins with Reynolds wearing the now iconic red and green sweater with a large, gold bow and nametag.

Before he can say much, the viewer hears the voice of Canadian actor Seth Rogan saying “hello” and the image pans down to the bow, which now has an animated mouth.

“Yes I can talk. Use your imagination,” the bow says.

“As a sweater and a fellow Canadian that comes out but once a year I’ve grown a little tired of Ryan’s like self-deprecating, deadpan jokes…Instead, revel in the wonder of a talking sweater as you make a donation to SickKids.”

Each time Reynolds tries to say something, the bow interjects, including when Toronto Maple Leafs player Auston Matthews makes a quick appearance to say hello.

“Please cut to the titles before he makes an obscure pop culture reference,” it says.

Our new film Ryan and the Talking Sweater comes out next Christmas! https://t.co/MqCs9lHdVa

The sweater has made appearances in all of Reynold’s holiday SickKids campaigns since he was tricked into wearing it to a party by fellow actors Hugh Jackman and Jake Gyllenhaal back in 2018.

Photos posted to social media at the time shows Reynolds wearing a green and red sweater with a large, gold bow right in the centre while Jackman and Gyllenhaal—who were wearing normal attire—laugh. 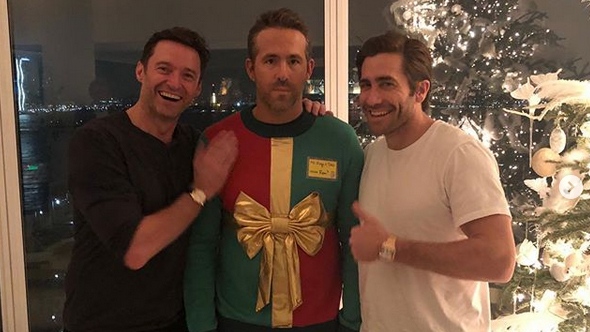 More than $300,000 was raised in just a few weeks in 2021 following the release of an animated video that simulated this holiday prank. The video told the story of a similarly-styled sweater in a store that gets passed over by every customer, except for one man who is looking for an outfit for a party that specified “fun” attire.

The following year, about 5,000 front-line workers received replica t-shirts and a number of patients were surprised with festive sweater-themed blankets. SickKids said in January that more than $640,000 was raised.

Multiple athletes, politicians and entertainers have taken part in the campaign through the year, including Jackman, Matthews, Andrew De Grasse, and Toronto Mayor John Tory.

According to SickKids, in the three years of this campaign combined, more than $1.7 million has been raised.

Those wishing to make a donation can visit the campaign’s website. Samsung Canada has said it will match donations made before midnight on Christmas Eve up to $100,000.