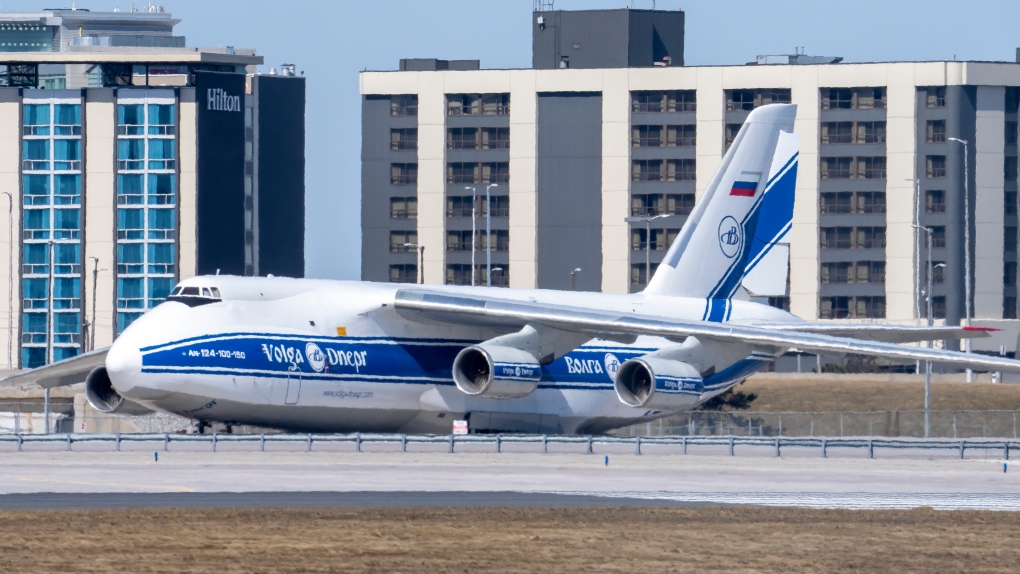 A Russian-registered Antonov AN-124 owned by Volga-Dneper sits on the tarmac at Pearson Airport in Toronto on Monday, March 21, 2022. (The Canadian Press)

The Russian cargo plane, belonging to the airline Volga-Dnepr, has been parked at Toronto since Feb. 27 after the Canadian government closed the airspace to Russian aircraft operators.

The order banning Russian aircraft operators from Canadian airspace is still in place, meaning the plane is still not allowed to leave Canada.

According to the Greater Toronto Airport Authority (GTAA), which operates Toronto Pearson, the owner of the plane is being billed 74 cents per minute to park.

"To save you doing the math, it works out to $1,065.60 for each 24-hour period," GTAA spokesperson Ryan White told CTV News Toronto.

The plane has been parked at Toronto Pearson for 88 days, meaning the owner has racked up more than $93,000 in fees, not including tax.

White said he could not comment further on the fees, or whether they have sent the airline an invoice, for legal reasons.

In February, the Antonov An-124 arrived into Canada from China, via Anchorage and Russia. The plane had planned to leave Toronto shortly after arriving in Canada, but that flight was cancelled.

Transport Canada said the aircraft had been prohibited from departing due to a ban on Russian-owned aircraft in Canadian airspace.

In a statement to CTV News Toronto on Thursday, Transport Canada said they have no plans to allow the plane to leave.

"The NOTAM remains in place, and there are no plans to make revisions or change the NOTAM at this time," Transport Canada said. "Transport Canada has informed Russian authorities about the NOTAM we currently have in place."

One scandal too many: British PM Boris Johnson resigns

A Quebec man who fell and broke his jaw, cheekbone and a bone around his left eye while visiting British Columbia says his surgery was cancelled after he was told his home province “won't pay” for the procedure.

Dozens of people have been displaced after an intense, third-alarm fire on Vancouver's Downtown Eastside Wednesday night.

As concerns grow that Canada's red-hot real estate market may be starting to cool, one real estate agent in Toronto says that some homeowners in the city are becoming increasingly 'desperate to sell right now.'

How to find cheaper flights this year as airfares soar

For those who remain undeterred by the daunting lines and flight delays at Canadian airports, questions remain about how to save money on air travel amid mounting fuel costs and inflation.